Now that Coachella has ended, it seems appropriate that Galantis has returned with big news. The guys played a massive crowd at the festival last year, and with barely any original music out at the time, were posed to be one of the most hyped acts of 2014. And they pulled through, going on a sold out tour, releasing a self-titled EP along the way, and this year most notably playing another packed performance at Ultra Music Festival.

It's no secret that Galantis's music is unique; a vision of uplifting, poppy dance music done with the skills of two seasoned producers and DJs, performed with live instruments on stage. Today their big announcement comes in a similar fashion with the official debut of "Peanut Butter Jelly" after its first play at Ultra as an instant download available with the preorder of their debut artist album entitled Pharmacy. With a "put this on repeat" formula, "Peanut Butter Jelly" is a fusion of disco and pop that breathes feel-good dance party. The single along with "Runaway (U & I)" and "Gold Dust" will be released on Pharmacy on June 8th via Big Beat Records. 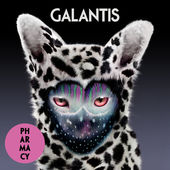