Boston's art, music and technology festival Together brings its fourth edition to the city next week (May 12 through 19), and this year's looking better than ever for the growing festival. While Together continues to bring a vast range of electronic music to the city, as well as showcasing local talent at every opportunity, they've also worked to expand beyond being just a dance music festival, with production classes, technology panels, art and film on the lineup as well as sets from unexpected artists like Juicy J. Having started as a series of events across the city, Together is also more centralized than ever this year, with many events happening around Central Square in Cambridge, including a daytime street festival on May 18. You can view the full lineup on Together's website.

Read on for a brief interview with creative director David Day, followed by EARMILK's top five Together party picks.

EARMILK: What were you working on in Boston before Together got its start?

EM: How did the idea for Together come about?

DD: In an email to every single musician, producer, promoter and performer in October 2009, I asked that we all put our differences aside and make a festival and call it "Together." The response was fairly overwhelmingly positive and the team was quickly born: Mike McKay, Joe Grafton, Alex Maniatis... even Eli Goldstein of Soul Clap was on the original steering committee (until he suddenly became massively popular).

EM: What's new and exciting about Together in 2013?

DD: Plenty, but I will say being located predominantly in one area is finally really going to be a positive change. The Together Center, the World's Fair, Together Central Stage, our Revitalize Lounge, Middlesex Lounge, Naga, Phoenix Landing, they're all within blocks of each other. And with the free seminars at Mmmmaven down the street, you can literally attend some world class talent by hardly breaking a sweat.

EM: What events are you personally most excited for this year and why?

DD: I always pick something different, because there is so so much, but Fred Falke and Lifelike are two all-time favorites of mine (Wednesday 5/15 at Naga [FB]). They've worked with Beyonce and like, U2, and who knows who, but their original music was very influential in my early appreciation of new music. It's hard to understand how people could not like French House, it's just so melodic and inspiring. Plus, with the Kitsune name on the club night, it's official as official gets.

EM: What advice would you give to someone trying to organize their own festival?

DD: Stay positive. It's difficult to do at times, but if you think you should bite your tongue, you probably should. Considering that, at least in the case of Together, this is largely done out of love and passion and a desire to see this community through, the last thing you need is a bad attitude. I'm overcome with emotion at the start of every festival. I love all the people who work on this and don't understand why people put so much into it, but then the end of the festival is here, and it's quite clear: We do it for each other.

Friday 5/17, Middle East Downstairs. Tiga, who will be kicking off Together at The Sinclair on May 12, isn't just a performer. He also founded and remains at the helm of Turbo Recordings, which has hosted releases from countless scene favorites from Azari & III to Brodinski and beyond. While Tiga's performance at the fairly new Sinclair in Harvard Square is sure to be a blast, I'm personally more stoked to check out this showcase of budding Turbo artists, especially Papua New Guinea producer Nautiluss, known for his slick techno productions, diverse sets and seemingly countless collaborations. Local favorite Doctor Jeep, who has seen support from producers like Claude VonStroke and Armand Van Helden, will be sure to please as an opener.

Saturday 5/18, Great Scott. It's hard not to love rapper/DJ Le1f, whose recent Fly Zone mixtape was a more-than-apt follow-up to 2012's awesome Dark York. Ditching social rules about how gender and sexuality normally operate in the world of hip-hop and dropping more nerdy references than we can keep track of, Le1f's also a good performer (and universally attractive to boot). He'll be joined by Don't Ask Don't Tell curator and DJ Colby Drasher, CVLT founder and relentless local dark overlord El Poser, and Subtropix founder Fuzzy Fotch. With Le1f headlining this diverse lineup of some of Boston's best local DJs and organizers, this isn't a night to miss.

Tuesday 5/14, Phoenix Landing. Local collective JASS always seem to be proving their attention to detail, with live-streamed basement parties, attractive graphics and visuals, and bookings like South London Ordnance, L-Vis 1990, and Shigeto at their Tuesday monthly at Phoenix Landing. For Together festival, they bring Berlin's Objekt, who, as a programmer for Native Instruments (the creators of Traktor), has an unsurprising knack for DJing and production. He'll be joined by a back-to-back set from Providence's Howse and The Range, whose Seneca EP was just released on Donky Pitch. 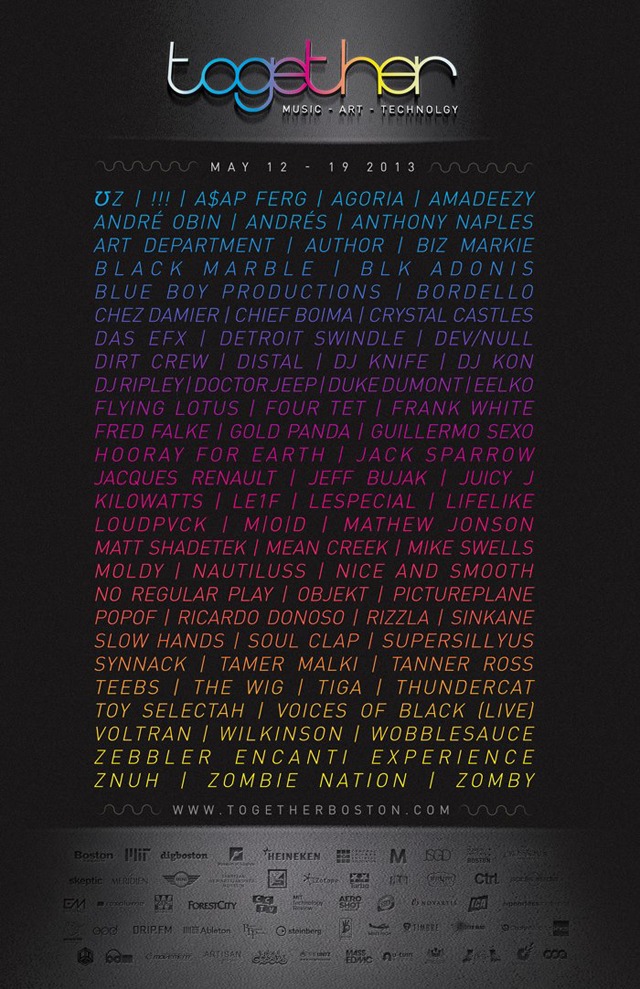