J*DaVeY's magnetic frontwoman Jack Davey raised many eyebrows when she announced plans to embark on a solo career. With plenty of talent and charisma to boot the move was a logical one and opened the door for Davey to showcase her versatility as singer-songwriter and offer listeners something fresh and new.

Boasting a sound markedly different from the signature hybrid electronic-soul she and producer Brook D'Leau packaged and perfected as J*DaVeY, Davey's recent solo work marks a sonic shift from the upbeat and lighthearted tunes to a darker, grungier sound characterized by a hybrid combination of indie rock and modern grunge production and emotive crooning and introspective and dense lyrical content.

Following the release of Side B of her double EP, Lo-F! early last month, Jack Davey has delivered some haunting, in-your-own-face visuals for the bold, unapologetic Joey Strat (of The Knux) produced record, "Shit Gets Deep". Directed by Nai Vasha and filmed at the notoriously seedy Hotel Cecil in downtown Los Angeles, the video acts as a symbolic representation of the shedding of Jack Davey's old self and her re-emergence as a new artist with equally new content, hence the video's fire motif. As Miss Davey explained:

I had a certain level of comfortability with J*DaVeY, and now I don't really know what to expect anymore. After we released New Designer Drug and Brook signed on to tour with Miguel, the dynamic of my band changed. With L0-F!, I'm shedding J*DaVeY and yearning to be rediscovered as a solo artist. Sometimes you have moments of desperation, where one day you wake up and you realize everything is not what you expected, and it's a lonely, dark place to be in. You just have to shake it off and move one… gotta hit the reset button on your soul. You have to step out of your comfort zoom in order to change.

With Jack's solo career in full-swing, J*DaVeY fans need not go into all out manic mode. While J*DaVeY has no plans on calling it quits anytime soon, Jack Davey is making quite the name for herself as a standalone artist with a fresh sound all her own. Watch as a liberated guitar wielding Jack Davey experiences an introspective bender and burns in effigy, thus leaving no trace for those who wish to admire her in her new video for "Shit Gets Deep" which can be streamed below.

For fans in search of more solo material from Jack Davey her solo full-length rock debut, L0-F! D'Lux, which will contain songs from both Lo-F! Side A and B, in addition to three new songs will be available December 11. 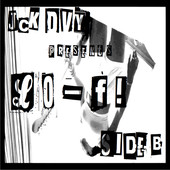 ....So, for all the "rock goddess"es she be throwin out... does she ever actually play this guitar.... I mean, I've seen her.... just not without tons of distortion and effects to cover her mistakes. Isn't it sposed to be lo-fi? Not lo-quality. There's a difference.