N.E.R.D brings a new addition to the family 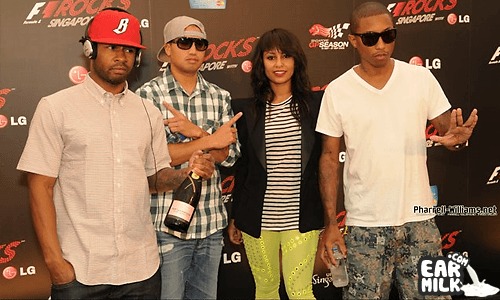 That's right ladies and gents, N.E.R.D has officially added a new member to their dynamite trio and she goes by the name of Rhea. Rhea hails from Toronto, far North from the crew's native VA Beach homeland, but apparently the ol gal had enough chops and style not only to solidify her a spot on the team, but also to land her a significant role on N.E.R.D's fourth album dropping in 2010 entitled Instant Gratification . Here is what MTV News has said about it:

"Musically, we're just somewhere else [with her]," Pharrell told MTV News. "The music is now very 3-D. It's something you have to hear. But you'll see. We're definitely somewhere else. I want to leave that impact moment for when you purchase your download and you purchase your CD. The music is very three-dimensional. We're just really excited. We feel like N.E.R.D. has always been the punks of hip-hop and the outcasts of alternative music -- just a little different. But this time, we're taking no prisoners."

The Neptunes artist explained Rhea might be petite, at just 5-foot-4, but her booming voice and her classical background blend in with the genre-bending trio of N.E.R.D., also including Chad Williams and Shae.

"Now you have this little Tinkerbell that's just stepped in and has been amazing," he said. "It's made it a fun process. We can go in so many more directions, because we have the vocal support."

Now I have to admit, the first thing that came to mind when I recieved this news was that this seems like the formula for another Black Eyed Peas. The idea of that kind of frightened me at first, seeing that Im not the biggest fan of Fergie, but based on Chad and Pharrell's musical background and track record for dropping awesome albums, I think this could be a very interesting move for them. Musically, N.E.R.D has such a focused idea on the direction that they want to move in, so I think it's safe to say that Rhea is gonna be a lot more than just a pretty face. Hell...she has to be.