Fresh off a scintillating gold medal-winning performance in the 2018 Winter Olympics Men's Halfpipe event, Shaun White has some new hardware to flaunt at his Air+Style festival this year. Pumping snow into Downtown LA's Expo Park, the global festival that merges winter sports and music will arrive March 3-4 and feature an eclectic lineup, including Zedd, Phoenix, Cashmere Cat, Cut Copy, DRAM, GRiZ, Mura Masa, Phantogram and Tinashe. And what would a festival be without the Big Guwop, Gucci Mane? Check out last year's video below:

What makes this festival so special is its hybrid of music, snowboarding, and skateboarding, which was added for the first time this year. Not a fan of the artist on stage? Go check out one of athletes shredding on the other side of the park, which include Dylan Thompson (X Games Real Snow 2016 Gold Medal), Frank Bourgeois (X Games Real Snow 2017 Gold Medal) and Halldor Helgason, one of the biggest names and most respected riders in the snowboarding industry.

You can purchase tickets here. 2-day GA passes are $149 and 2-day VIP are $239, children 10 and younger can enter for free with a ticket-holding adult. 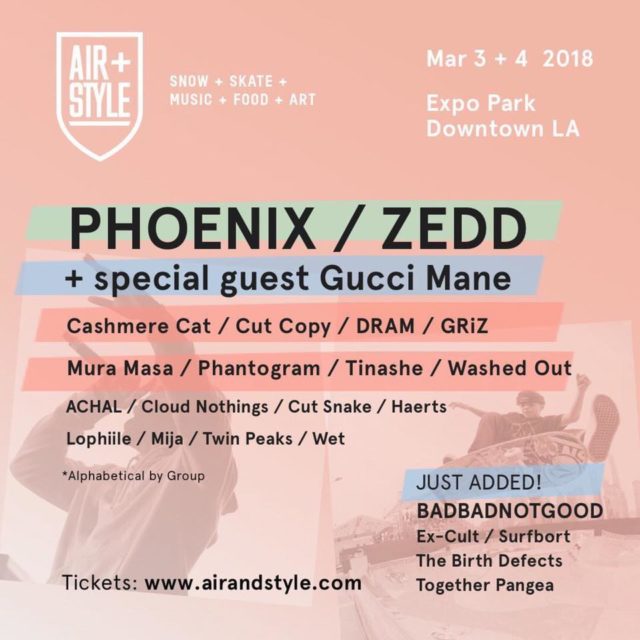