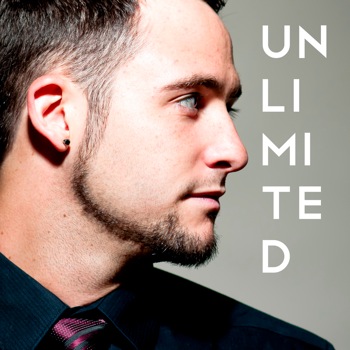 Last week, Denver based producer Ronnie Weberg, known to many as Unlimited Gravity, released his third full-length album named Unlimited. Last year, Ronnie impressed the world with his version of AWOLNATION’s “Sail”, which now has a staggering 6-million+ views. Now with fans loyal to his own smooth yet emphatic glitch hop/funk sound, he gives us Unlimited which he released via the well respected 1320 Records—STS9’s label.

Prior to Unlimited’s release, fans were teased with “Source’s Orchestra,” the album’s opening track. For one, the title could not be more appropriately named. Without wasting any time, Ronnie introduces you to a full symphony. With a bold ensemble of violins, cellos, and bass drums, you are transported to a live setting where Mozart has just finished his opening act. At a thorough 8 minutes, I can’t help but close my eyes and picture a 75-person philharmonic, led by an old conductor who can’t believe his own actions, stunning 10,000 dropped jaws at an unnamed beautiful red canyon. Whereas many producers are incorporating live instruments into their electronic works, this one sounds quite the opposite. Unlimited Gravity starts his journey by making it extremely clear he is taking the role of a composer way more than producer, where synths and glitches are just as delicately used as any other instrument is.

As you start to breathe slower as the opening scene ends, “Lvl. 1 Diagnostics,” the second tune, illustrates Ronnie’s spectrum of sounds and offbeats, yielding a soulful funk. 16th notes overlap crescendos and staccatos, sometimes over other smooth baselines, and sometimes over an eerily dark piano. Starting and ending with a melodic piano and no beat, the song does come full circle and gives the listener a smooth landing from an otherwise coarse and busy middle verse. It is a seamless segue into what sounds like the all-loved sitar, which is introduced in the following track, “Flight for the Ragents”.

What follows is what I unofficially classify as the second chapter of the album’s journey. The fourth track, “Sexy Shortcuts Feat. True Livin,” slows things down a bit and adds some sexy connotations to the album. Possibly one of my favorites, this song is led by a single electric guitar with strong characteristics of the Blues genre. But finish the song and you might find the final concoction is eerily suspenseful music. If it had a face, it would be somewhere between the impactful faces of No Country for Old Men and Gran Torino.

Song 5 is for the horn lovers out there, which includes myself. Further exemplifying Ronnie’s respect for variety and freestyle experimentation, “Back To Vision” opens with a deep and dark bass only to immediately be countered by an army of trumpets with a purpose. Soft glitches put the horns at the forefront, giving them a medieval significance. I’m honestly not quite sure what I am or should be thinking at the end of the song. I’m trying to picture a castle on a space station, but that doesn't make much sense. What I do know is I’ve never seen this variety before, in terms of instrumentation and time frames, and that intrigues me to new levels.

“Regally Steezin” is the perfect name for the following step in the journey. High-pitched violins and cellos work harmoniously with trumpets and percussion, putting a huge smile on my face as a lover of Jazz and Funk. This song has the most delicately used electronic synths, most appropriately placed only in the areas live instruments cannot reach, as if replacing a horn’s mute. Possibly one of the LP more experimental tracks, it’s another one of my favorites. It’s as if it starts and ends in black and white with the most colorful middle verse you’ve ever seen. It is the unofficial end of chapter 2.

And that’s because you’re transported to aforementioned castle’s dungeon in the next track, “Hybrid Style.” Gone are the uplifting bold trumpets. Here are the grungy synthetic melodies that belong underground and only underground. But, in true freestyle fashion, you will hear clear components of classic rock electric guitar.

The 8th song, “Elaborate Convection,” is just that. Cellos provide a base layer opening. On top, Unlimited Gravity builds with more and more melodic strings. At one point, I forgot I was listening to electronic music. Until… well, just imagine Mickey Mouse conducting oceans in Fantasia to this and it’d seem to fit perfect.

“Gregorian Steeze” shan’t be listened to with the faint of heart. It’s dark, it’s synthetic, and it’s extremely hypnotic. The orchestra is on break for this one while the final battle of the journey commences. It’s the perfect predecessor to “Phukkuh Shmeezey,” the penultimate song, which embodies that classic glitch hop that will move all bodies in one direction or another. It builds to a “drop” that I can only describe as bunjy jumping off a loud bridge into silent bliss with just the right amount of deep synths to support your flight. Don’t worry—it’s safe.

The album concludes with the self-titled track “Unlimited,” bringing you right back to the opening scene with Mozart’s party. Ronnie isn’t messing around with his symphony and brings in the world’s most historically present instrument, the organ. It is a resounding conclusion to an already forceful 10 songs. The title perfectly reflects the vastness of time in this song, and thus album. It’s a real trip through space and time. It takes what your brain wants to think, and throws those preconceived notions out the window. This isn’t for heavy bass lovers; it’s for music lovers.  When Unlimited Gravity described his label, Mile High Sound Movement, as a safe place for freestyle bass music, it sounded like the slogan for many of the talent-filled labels out there. But I was wrong. If this is what MHSM aims to make, 1320 Records should be honored to have Unlimited as well.

Unlimited Gravity is playing a CHARITY show TONIGHT at Denver’s own Armoury (FB Event | Tickets) alongside Murphy of STS9. See you there.