Dear Ray Volpe, you okay hun? We need to talk about your 'No Emotion Allowed' EP

...Is all I have to say after finally sitting down to listen to your brilliant No Emotion Allowed EP. I was skeptical about the name because, as you know, emotion is always allowed in this house. But I'll give it to you on this one - whoever hurt you made for some damn good dubstep. Clocking in at ten minutes of absolutely riotous sound, No Emotion Allowed is a slice of menacing bass music of the highest caliber. People, this is what sound design looks like when you started producing music at age ten, ffs. Anyone who ever said dubstep is dead has ~clearly~ never heard Ray Volpe.

We're asked "guess who's back, bitch" at the onset of "Showtime," and Ray answers with simply maniacal energy - massive screeching saws, electric guitar abounds. "Wet Napkin" gives us a brief taste of the ethereal, hovering sonically in the realm of melodic dubstep for brief overtures, only to be replaced by more sheer punishment. "Rave Rage" ends things on a delightful throwback rave note. Out the gate in proper dance fashion with an unexpected four-on-the-floor intro, the tempo kicks back into Ray's prime territory with the addition of distorted vocals and those signature out of control saw chords.

Ray Volpe's first headlining tour of the same name is sending a hurricane of sound through a city near near you this spring - don't miss it! 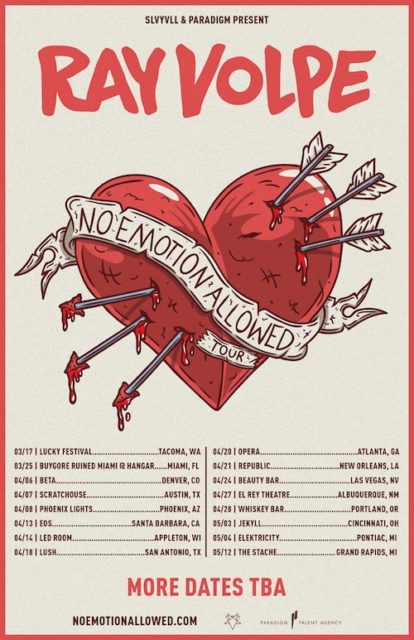