Florida emo outfit Dikembe have been pumping out a ton of work these last few years. They've released a steady stream of music since 2014's Mediumship, dropped their solid Ledge EP the following year and crafted the criminally underrated Hail Something last summer. They've also put out a few of demo releases and b-sides, played countless DIY shows and a few FESTs and the launched their label/store Death Protector Collective.

And this year, while the band remains quiet on an upcoming LP, it still seems like they've managed to put out more work. At the top of 2017, Dikembe announced a Covers series in which the band would cover a single song for every month of the year. Today, EARMILK is proudly presenting the premiere of May's chosen cover song: Green Day's "Uptight". We also had a chance to speak with frontman and vocalist Steven Gray on Dikembe's "Covers" project.

EARMILK: So why are you doing covers?

Steven: We've made so many records the past few years. It started becoming stressful, so we decided to relax for a bit. But like, we are still a band... We just felt that covers were very therapeutic, in a way? Like, sitting around and listening to music and then playing that music and putting it up online. Plus it's easy as fuck, so why not? We also played a Pixies cover set at a FEST after party and have been wanting to do some sort of cover shit since. There are like a million reasons [laughter], but those are the main ones.

EARMILK: How are you guys agreeing on what to cover?

Steven: We seriously just do it on the fly. We sort of talked about the first few months when we first decided to do it. But the one we are doing after the Green Day one was chosen when I realized it was my wife's favorite song. And the one after that has a sick guitar solo, so we were like, yeah dude. But we choose whenever we hear and remember to be a banger.

EARMILK: So in one month, it's choosing a song, learning it and recording

Steven: Yeah, basically. It's not really hard to record a song, because David has the recording compound called Haunted Muscle Beach (shout to the beach motherfuckers). So we try to learn the songs pretty carefully. I'm pretty sure we've redone a lot of shit in the process, but I couldn't get more specific because I have dad brain. But we redid vocals on the Frank Ocean track and the geeen day track for sure. [laughter]

EARMILK: Do you plan on putting any of these covers out as physical releases via Death Protector Collective?

Steven: Maybe. But I'd rather spend the money pressing another LP of ours. There also might be shit regarding selling covers or whatever. Maybe a secret underground tape that are only available at our houses. Good luck everyone!

EARMILK: Why this specific Green Day track? Is Green Day a huge part of Dikembe?

Steven: The past year or two they really have been. Randy claims to have been in Green Day at some point in his youth. Our transition into a three piece, I think, was the biggest "oh shit, we all love Green Day!" moment, which you can hear fairly loud on Hail Something. But the short of it is: Green Day rules and we all love them and have some sort of weird connection/inspiration from the band.

Catch Dikembe on their first tour in the U.K. with Other Half kicking off June 6. July 6, the band arrives back into the U.S. for a stint with Prince Daddy & the Hyena. 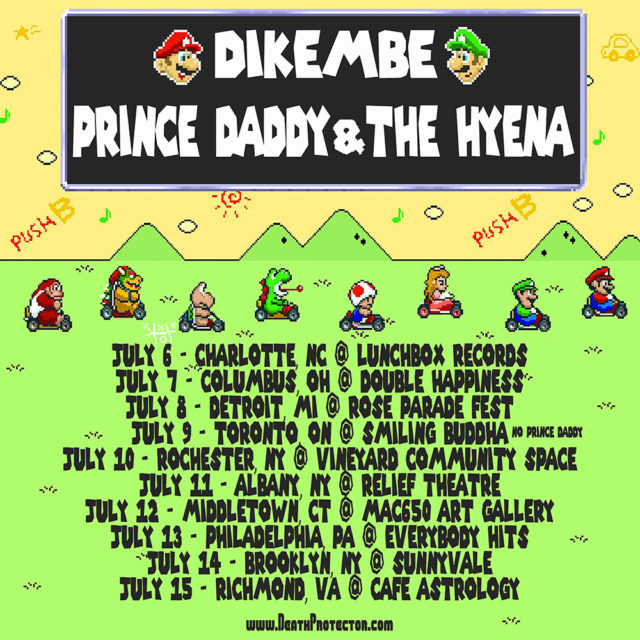