The Beauty in the Fast & Furious, Unraveling the JOYRYDE journey [Interview]

What has always enticed me with cinema, is its ability to open a door to imagined experiences, all in the comforts of a theatre, sofa, or wherever it may be. Especially when it comes to more adrenaline inducing films, audiences seem to hold a perplexing desire for more nefarious situations. This alluring badassery is mirrored in the sounds of upcoming electronic producer JOYRYDE. The artist has had a whirlwind of a year with his recent success. Tracks including "Fuel Tank" and "The Box" paved way for his self-dubbed "Maniac House" style to thrive, exhibiting a raw vivacity to peak into the electronic world. Adding onto his successes, the producer has played the iconic EDC and kicked off his Australian tour this past summer. EARMILK was given the special opportunity to catch up with JOYRYDE, to speak to his inspirations, ideas and the milestone he encounters at his upcoming debut LA show.

Also known as Jonney, his humble beginnings came to be like many. Growing up in London, JOYRYDE was exposed to the prominent Drum and Bass, Garage and House scene that held a constant wave in the area. Beginning first and foremost as fan, JOYRYDE cites his initial inspirations from the likes of The Prodigy, Justice and Pendulum.

"Growing up in England, there was a strong presence for underground rave music. But the absolute pinnacle of my idols were The Prodigy. I thought the music was completely colorful. As they developed to a full band, the design, videography and stage presence, it made me appreciate that I had made the right choice in who my idols were. To know I was listening to a band that gave everything they could possibly give to their fans... experiencing that made a profound effect on what I was going to do with my time."

This organic epiphany was what led to Jonney's desire to contribute to the music community. In 2013, the electronic powerhouse Let's Be Friends was formed alongside Oren. The duo took the electronic scene by storm with their pulsating style and "full flavour" sound. Eventually, this led to the birth of JOYRYDE, allowing for the exploration of an individualized sound. Regarding this transition from working with a partner to working independently, JOYRYDE expressed that the creative process was not as different as you'd expect. With this in mind, the producer stated, "Whether I'm working with people or alone, I'm always working towards something with an outcome in mind. I see things as a full project. You're in projects together for the overall experience.".

The producer only made his move to Los Angeles a year ago, after having spent time in London, Mexico, New York, Israel and more. But considering the fluctuation in the producer's environment, JOYRYDE discussed a heavy emphasis in staying loyal to his own idiosyncratic sound.

"Let's say LA is a dinner party, someone brings the jelly, turkey, whatever. Not everyone is bringing the same thing and all these dishes come together as a feast. It's very important that I contribute the same element to this city that I did when I wasn't living here. When I go to the studio, approach my videos, I continue a train of thought as if I wasn't living here, I always make sure that mindset I have is that I'm taking my own music into the city."

If you're familiar with the brand that JOYRYDE's developed, you're well aware of the reoccurring themes present, translating directly from his music to visuals. Designing many of the videos himself, JOYRYDE often curates a cohesive aesthetic of bold typography, luxurious automobiles, action-packed footage and anything with a monstrous enigma. When inquiring about the visual component about the project, Jonney was firm in his concept, bluntly stating that simply the "edge" of "JOYRYDE" as a word, held great appeal for him. Diving deeper into the back story, JOYRYDE reflects and states,

"Not many things in the world can attract you and instill some fear in you".

The artist highlights a stark contrast, referencing the sheer beauty in cars yet understanding the power and destruction they also potentially hold. Though diverting to one focus may seem limiting for any artist, JOYRYDE views the car enthusiast theme as a starting point to "evolve into other forces equally impactful".

If you carefully analyze the producer's music you'll come to find meticulous details add up to encapsulate his cinematic style. From house, dubstep to hip hop, there's no pinpoint categorization to his sound. When asked about his production tactics, JOYRYDE explains that he never writes a song in one go and instead collects small ideas. Jonney states, "I'll hear a sample and rework it into an idea. Most of the time you're spending so much time on a record making it something that it's not.". This process in turn makes the sonic product "more current" and natural.

It's a rarity in the electronic scene when an artist can uncover a raw identify for themselves, equally levelling out visual and sonic components. With these two elements in direct correlation, the vibe found in JOYRYDE speaks as strong and in a thriving space to branch out. In the end, Jonney's vision is to do what past influences have done for him, creating a dimensional and dynamic experience that emphasizes both showmanship and passion. With the discourse of the loopy rollercoaster within the EDM scene, Jonney humbly directed his gratitude to his tight-knit team mentioning, "The team that I have around me, has allowed me to stay me. I was sure that this might be a big struggle. That in itself has been an extremely pleasant surprise.". With a fervor in his tone, JOYRYDE continues by holding a light to the importance of an artist's fanbase and grasping onto one's individuality stating how integral it is "to maintain is the connection between artist and his listeners. That is paramount, as far as I'm concerned."

"The most amazing thing is when you share a vision. When you hear a song from an artist you like, in your head you picture music a certain way through a colour, a place, a party. When you put a visual to something, it allows multiple people to share the same vision. That has been the glue to JOYRYDE, that unity between people. I don't see myself any more of JOYRYDE than the listeners. This has developed in front of my eyes, they're contributing to JOYRYDE just as much as I am."

Wrapping up the conversation, the producer concludes with an excitement for the upcoming show alongside Rickyxsan, Gravez, Sam F and Swage. The Control Debut LA show at Avalon takes place on the 23rd and JOYRYDE hints that he's "gonna be doing things there that I've never done in my whole life.". Regarding the future, JOYRYDE unveils "I finally realized I'm letting go of all restrictions possible. I'm gonna find out before the end of my life what I'm capable of and pour everything I have in this life into this project." With a killer sound, the producer has found his niche in the electronic scene for everything loud and painted in the glamour of cinematic glitz. But beyond the heists, muscle cars and thrill of it all, JOYRYDE's passion for dimensionality in music strikes as captivating as he strings along his "ryders" on a joyride like no other. 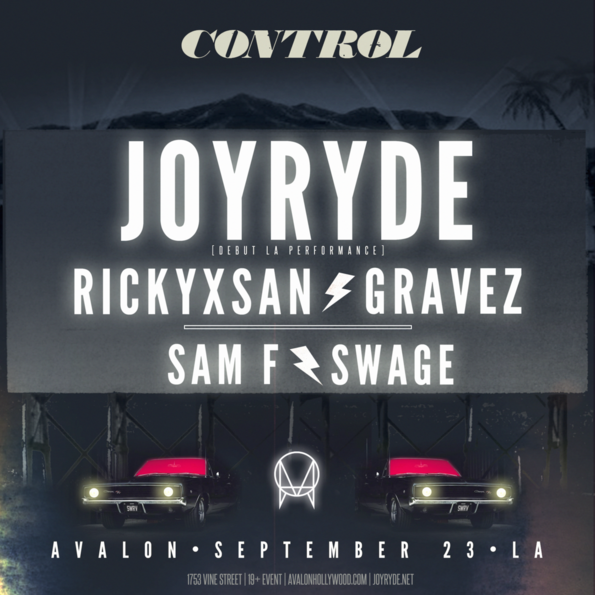