4 years ago by Clark McCaskill

Today LA based soulful powerhouse Bishop Briggs released her fourth track "Pray (Empty Gun)". It's a dark-pop track filled with trap-style percussion that lowers itself to showcase the power and breadth of Bishop's voice. It's  one of her most honest songs to date, singing of praying and remaining positive through pain and grief. Her voice fluctuates from fragile and earnest to explosive and optimistic. It's yet another beautiful track in her already glistening catalog.

Last year I was stumbling through Spotify's newly introduced Discovery Weekly playlist when I happened upon the astounding song "Wild Horses," by (at the time) BISHOP. I was blown away by her booming soulful voice, gripping bass hits, and the perfectly orchestrated rise in fall between menacing and sweet. Obsessed, I scoured the internet hoping to find some more information on this elusive new artist. Alas, all that was found was a photo posted to Twitter of a cassette tape containing two additional songs, "River" and the "The Way I Do." I was heart broken, but turned on all notifications to assure I knew when new music was released.

Fast forward one year and BISHOP has changed her name to BISHOP BRIGGS, played festivals around North America, and just came hot of an incredible performance of "River" on Jimmy Fallon. Her explosive energy and unadulterated joy upon that stage is infectious, it's inspiring. We sat down with Bishop to talk about gratitude, meditation, and her upcoming tour with Coldplay, which starts August 20th. 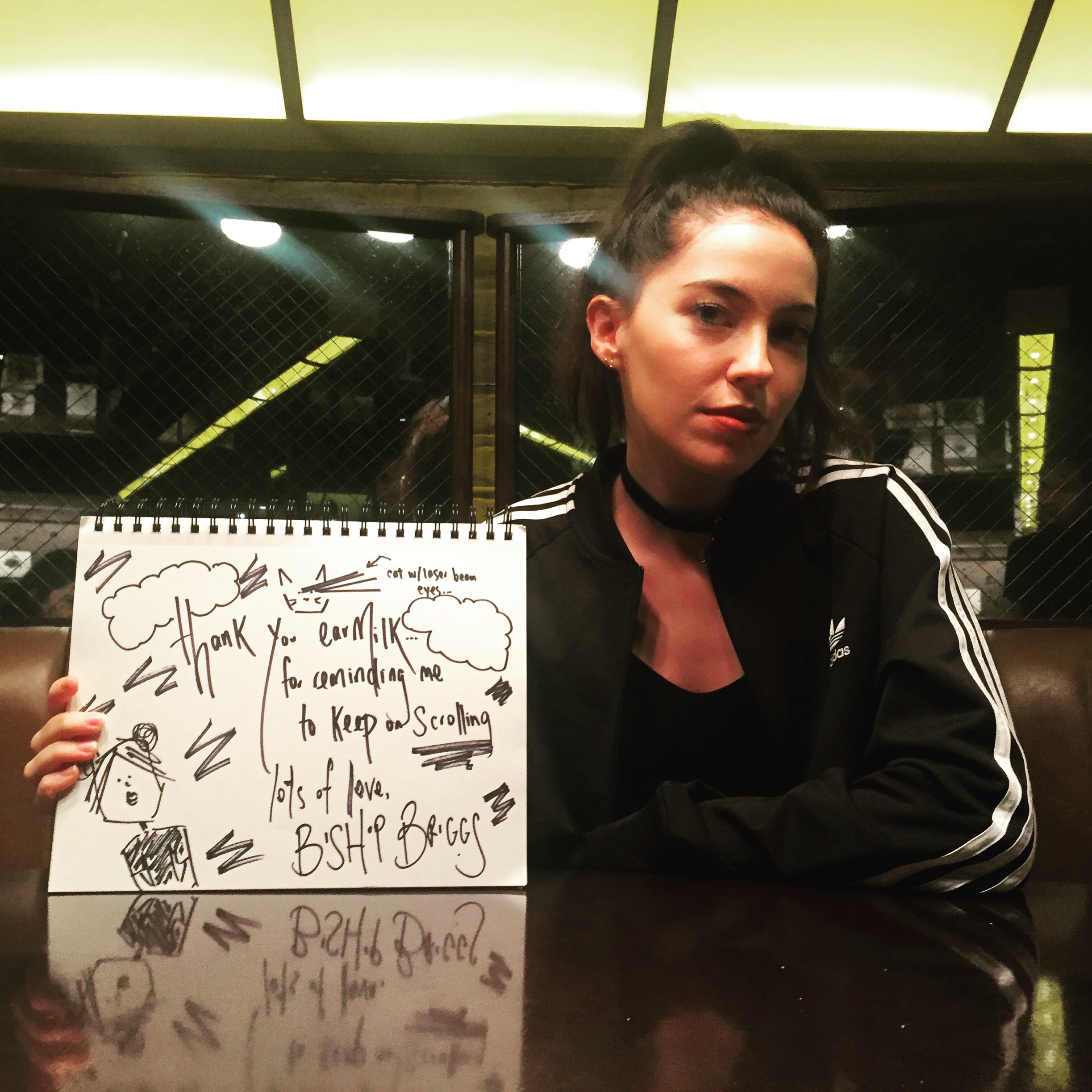 EM: Tell me about the Jimmy Fallon performance.

BB: It was super surreal and because it was my first time doing something like that, I was way more nervous than I normally am. I'm normally very nervous before shows. I try to meditate. I try to find my zen. But with this, all of that kind of went out the window I couldn't believe I was there.

EM: So you meditate, I started meditating two weeks ago. It's done phenomenal things for me. What meditation tips do you have for me?

BB: I use this app Headspace. It's this calm British man talking in my ear. With this one, they don't use any music and I think it kind of forces you to really focus and really zone out anything that's going on around you. It's changed my life.

BB: I'm someone that always tries to practice gratitude, but when I started meditating I feel like it became one and the same. Instead of meditating to just calm myself, it was like meditating each day to have that moment where it's like, "This is what I'm thankful for. This is what I appreciate about today."

EM: So what are you grateful for?

BB: This. Right now. This moment. It's amazing.

EM: You're very interactive with your fans and at you shows. I love that. Are there any particular fan interactions that have stood out to you ?

BB: Everyone each day stands out to me but, there was this one that I got two days ago. It was a girl that was in a Porta-a-potty. We're at a music festival and she said, "That moment when you still jam out to Bishop's set." Or something like that. You could hear River in the background [Laughs} It was video taped. She really went through and committed fully. Anyone that commits fully I love.

EM: All of your songs have religious tones to them. Are you spiritual?

EM: Why do you chose to be spiritual?

BB: I think when you take in life and you truly appreciate it for what it is it takes you to a higher place. No matter what you believe or don't believe, you know? If I see a piece of nature it's going to give me a step back and take me out of my body. Anytime I'm in awe on stage, I feel as though I'm, having a spiritual moment. I'm so in it. Ya know? And in the moment. I'm always near tears, because this is what I'm here for. This is my biggest passion.

EM: I discovered Wild Horses last year on Spotify and I wanted to know more about you and as I was searching I found the only other bit of music you had was on a cassette tape that was in Los Angeles and I'm in New York and I couldn't get it, and it broke my heart. I saw two other songs on their and I was like, wait I need to hear this other music. Why did you decide to record your first music on a cassette tape?

BB: Well, we were trying to be hip. Truthfully, we wanted it to be something that if you knew of us early on, you had this piece of memorabilia. It was exciting. It was only people that had maybe gone to the studio and heard a bit of the music or had gone to a show, and so it became this little exclusive thing, which now I want you to come into.

EM: You work with two other producers. How involved are you in the creation and production of your songs?

EM: It also sounds like there is a gospel choir in the song. Did y'all record with one?

BB: That was actually me. That was me and I think for some of the other harmonies it was Ian. Yeah, we just stacked them and tried to add as much soul as we can. We would love a gospel choir by the way, but the budget...

EM: August 20th, you open for Coldplay. At the Rose Bowl. In your hometown of Los Angeles. What does that feel like?

BB: When I first found out about that I was in the studio and just the human in me cried. I was just so shocked. I feel like this interview is surrounded by me saying how thankful I am but, truly it's Coldplay. And to be given this opportunity I'm just going to be taking every second of it in?.

EM: In a perfect world, what song would you duet with Coldplay?

BB: Regardless of what song I did, if it was live, I would be crying. So lets just put that out there. But I feel like I'm going to pick two of the most depressing songs but it's like Fix You and Yellow.

BB: Ooooooh. So remember I was 90s in Japan. So the two shows that were on wereMoesha and Skeeter. It's a puppet, look it up, you'll never forget it. And then All That. So those are the three things that would stream. So I'm going to go with all that. It was an amazing theme song, it got everyone pumped up.

BB: Back in the day it was "Greatest Love Of All" by Whitney Houston, decided to start small, nothing too big. But my go to today I'm still figuring out. I need to hit up more karaoke bars as an adult. I still haven't gotten into it.

EM: If you had the opportunity to take over every screen in Time Square for five seconds, what message or video would you put for everyone to see?

EM: If you could bring back "What's the dealio" or "that's whack." What would you chose?

BB: That's whack. I've being saying a lot like, "They're a damn fool." And I feel like that's what just goes along with that. So I'm going to go with that's whack.

EM: I just called out on a post for saying "clutch" too much. Do you ever read your comments on your videos?

EM: If you do happen upon a negative comment, how do your process it?

BB: It depends on what it is. I kind of just keep on scrolling, That's the best way to deal with it. I think a good way to combat it is to rewatch the video of the girl in the Porta-a-potty. It comes with the territory. I think one of the first lessons I learned with all this is that you can't be a people pleaser. You have to be OK that not everyone is going to like you and not everyone is going to love you and you kind of have to have that inner piece. That being said, it doesn't feel nice but you have to keep scrolling.

EM: What's next for you?

BB: Next we are going to be releasing some new music really soon. Coming up next is the Coldplay Tour. We have a few festivals that I'm excited about. And lastly, we're doing a fall tour with Kaleo. (look up)

EM: Last final question — What does Jimmy Fallon smell like?

BB: Oh my god, that is so funny. That's such a good question. This is going to be a little strange, but he smelled like fresh oranges. But I think it was a mixture in his cologne but it was super refreshing. I really liked it. Very warm. It's like there is an orange field way far away and then a mix of jasmine in there.