As Dillon Francis teamed up with Totally Enormous Extinct Dinosaurs on their "Without You" track, released a few months back with Mad Decent, the seven tracks off this week's remix EP are recieving a lot of hype. First off the EP, Dillon Francis took a stab at the "rebirth" of his track, and then there are remixes from the likes of Doctor P & Flux Pavillion, Treasure Fingers, Torro Torro, Hayden James, Henry Fong, and Low Steppa. While each artist took the track in a very different direction, lets take a look at the electrostep remix from Southern California native Henry Fong. Fong recently took to the scene by storm; recieving great amounts of support from the very beginning, he has been working with top name DJs and producers and we should continue to expect great releases from him.

The gentler, more relateable nature of "Without You" came as a curveball to some Dillon Francis fans who have come to expect heavy tracks from him. But Fong has managed to give the track some sweet progressive builds and sneaks in some soft electro after the drop that spice up the track enough to hit the dance floor with. The transitions are flawless on this track and the remix EP as a whole is definitely worth checking out. 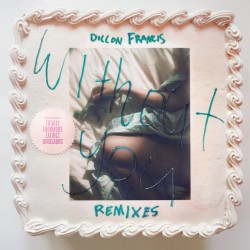