One inebriated night wandering the streets of New York City, a strange woman approached my friend and, in complete earnest, said, "You're a firework, I can tell." I guess I could also toss in a Katy Perry reference here, but I'm too cool for that. The point is, some people's explosive presence can only be described in one way, and that's as a "firework." It's a natural kind of energy that's not easy to find, an energy that's not forced or gimmicky but purely exists because that person is genuinely having an awesome time.

G-Eazy, definitely an Earmilk darling (no one's arguing about how much we all love him), played a short set last night at Boston's Middle East Downstairs, the first stop on his tour with Schwayze and Cisco, Mod Sun, and others, but I'm going to go ahead and state, with a certain degree of authoritativeness, that he stole the show (I just realized we used the same words for his performance at A3C, but quite frankly, it's true). He has that je ne sais quoi that makes someone a "firework." His interactions with the crowd were seamless and his actual performance was perfection. He even managed to make bringing a girl up on stage not the most painfully awkward thing in the world to watch.

Before G-Eazy's set, I was wishing I had a drink in hand (despite my persistent Halloweekend hangover and sworn one-night sobriety) because the crowd was largely insufferable. Like, a dude spilled an entire beer on the lower half of my body, looked at my distraught-yet-surrendered-to-the-shittiness-of-the-scenario face, and shrugged. I spent the entire set before G-Eazy's plotting to purchase a beer for the express purpose of splashing it all over his clothes and running away. Then I remembered I probably can't run in heels. Then G-Eazy took the stage, and in spite of all of my rage, I couldn't help but smile and have a good time.

G-Eazy looks a little bit like a lanky cross between James Dean and maybe a hint of Rick Astley at his peak. You would proudly take G-Eazy home for dinner with your extended family, a thing you would never even consider with Lil Wayne, DMX or Nas (unless you have an awesome extended family). You probably wouldn't tag him "rapper" if you spotted him on the street. But when he opens his mouth and performs, he's shockingly awesome (well, not shockingly for me, but if you'd never heard of him before, you'd be floored). I have to thank Earmilk for being the reason I know about G-Eazy — I would never have heard of him if it weren't for my interview with him back in August! 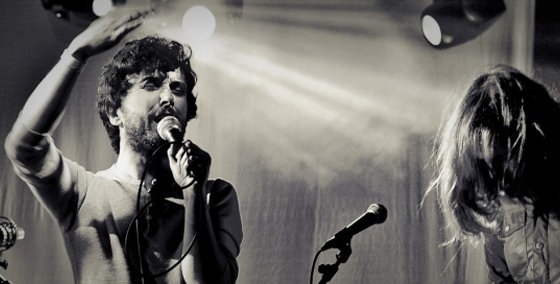 Rostam Batmanglij – "Don't Let It Get To You"