Cosmic Hangover: a retrospective on Florence + The Machine's "Lungs"

1 year ago by Tanis Smither

The story goes that Florence Welch wrote "Cosmic Love" while experiencing a monumental hangover. Throughout much of her early career, Welch was described as a prolific partier. If you trust early Vanity Fair profiles, she drank deeply and careened about London like a hurricane with her slightly manic energy, composing oracular, painfully self-aware poetry, including on the career-defining Lungs, which celebrates a decade this month.

Ten years later, Welch is sober and her public persona has mellowed considerably. But her genre-defying debut album Lungs remains unchanged in all its hopeful, unapologetic debauchery. For the decade anniversary, I've found the two perfect bottles of wine to consume while you (inevitably) revisit the High Priestess' first musical triumph. So dance around your bedroom, drink straight from the bottle, stain your teeth.

The first of two distinct categories that comprise Lungs: bold, dark, sweeping and full of persistent romanticism. "Girl With One Eye" draws on Tom Waits' longstanding tradition of taking the grotesque and morbid and pairing it with a seductive, pretty melody. She practically croons the line "took a knife and cut out her eye/I took it home and watched it wither and die." The angry, punk influenced track "Kiss With A Fist" sounds as though it might be better placed alongside her later work on How Big, How Blue, How Beautiful, but is one of the chief reasons Lungs became so groundbreaking in terms of its genre mashup. Although the beginning of "Cosmic Love" starts with a glittering crescendo of harp, there is a bleakness to the celestial words. "Rabbit Heart" is sacrificial with references to Ancient Greek mythology. All this in mind, you could only go Italian. The Masi Costasera Amarone Classico is rich, with aromas of plum and cherry, and notes of chocolate, spice and earth. Amarone's are typically full-bodied, but the final sell of this particular bottle is the rich, ruby red colour. 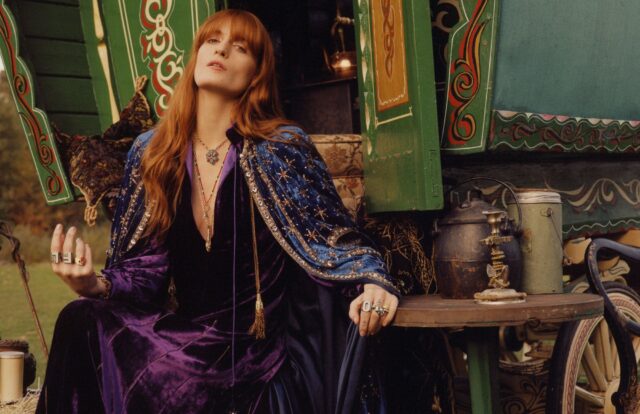 Our second wine is a rosé. Florence contains multitudes, and the selection must reflect that. It wouldn't be a cosmic hangover without a little bit of sugar, and it wouldn't be Florence without something floral. Domaine des Nugues Beaujolais-Villages Rosé 2017 is 100% Gamay rosé. Tangy with light notes of melon, but still semi-dry. “Between Two Lungs” comes at Lungs’ midpoint, placed amid “Drumming Song” and “Cosmic Love” as a respite from the booming, soul-shaking percussion of both songs. Florence likes to play with dichotomy archetype. She has said before that this fascination leaves her with the big subjects: love, life, death, sex and violence. As such, she makes up for the darkness with the half of Lungs that is relentlessly hopeful. The celebratory "Dog Days Are Over" kicks the album into gear with sunny harps and infectious percussion. This is a tune for throwing caution to the wind. Like "Cosmic Love," "Hurriane Drunk" is a bit of a wild card. The title is perhaps an accurate description of a Lungs-era Welch, but the instrumentation is so jovial that it lands itself in the rosé category. Finally, Lungs reaches its conclusion with "You've Got The Love." For all the mood, this is a humanist album. I don't recommend you drink two whole bottles of wine in one sitting, but even Plato and Socrates would agree: among the most human of things is connecting over art with a large glass of wine.