1 month ago by DeJon Paul

Out The Blue Records' signees, BlueBucksClan return with a scorching new project, No Rules 2. The 16-track mixtape came as a surprise late Monday night via Soundcloud, as the pair dropped the sequel to last year's project of the same barring. Jeeezy, and DJ spend the project detailing the high-end lifestyle of luxurious Los Angeles living; tinted by designer labels, foreign cars, and fine dining. 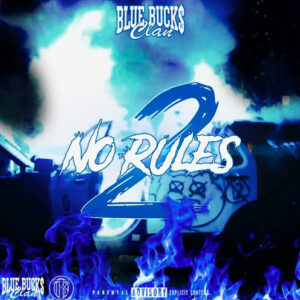 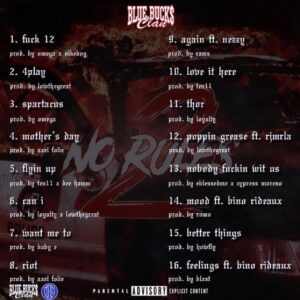 The tape's single, "Want Me Too", precedes with vigor, released just last week, burdening one of my favorite rap performances from the duo to date. The Baby E produced tune serves an alluring rap as the two emcees seduce a potential Queen with gift suggestions such as Celine and Dolce; inquiring if "pulling up in that Benz" is necessary. "Thor", released earlier on the group's Clan Virus EP, is an electric cut by their in-house producer, Loyalty, best noted as big stepping, and Rolls Royce Cullinan friendly. The raunch on the song is only matched on "Can I". Their "Breakfast" collaborator, Bino Rideaux appears on both the Romo produced "Mood", and BLXST laced "Feelings", the latter closing out the tape. Former 400 Summers / Interscope signee, RJMRLA links with the Clan on "Poppin Grease", a slick appearance taking shots at the likes of Raz B and shouting Free Max B.

The scammer friendly raps on tracks such as "Riot (D-I-OR)", and "Spartacus" peak a new level of shit talking. It's on an earlier track "4 Play", produced by Cali hitmaker, LowTheGreat, that bares the mixtape's most playful production and subject matter. Several references to felatio emphasize this particular group's witty wordplay. Another brief observation pertaining to this release is the constant repetition of label negotiations and their regarding stance. "Told the label nigga to his, no I ain't signing this" raps Jeeezy on "Mother's Day". Nonetheless, Bucksclan's army is quite militant, playing by absolutely no rules.