7 months ago by Chloe Robinson

Casting a potent spell, UK duo Broken Bones Matilda release their captivating new single “Everafter.” Written in the eyes of a teenager experiencing the ups and downs of young love, the song radiates distant memories of plucking up the courage to confess your feelings to your crush.

Striking guitar melodies compliment the otherwise subtle instrumentation, while raspy vocals reminiscent of Stevie Nicks, result in a familiar and nostalgic song, taking us back to our high school romances. Produced by Scott Barnett at Peter Gabriel’s Real World Studios, the song was recorded straight to tape, exuding a pure and natural sound, shimmering with atmospheric soundscapes.

The release of “Everafter” comes alongside the announcement of the duo’s virtual brewery tour. Setting out to help raise money for #saveourvenues, Broken Bones Matilda will be virtually travelling the UK, stopping off at craft breweries and performing online to show support for small, independent businesses who have taken a massive hit during our current crisis. Be sure to check out their tour dates, grab a beer and don’t miss out! 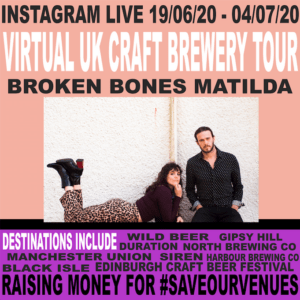