The Choices We Face: two triumphant nights in NYC with DROELOE [Tour Review]

1 year ago by Katey Ceccarelli

They aren't bitbird's little brothers anymore. The two-piece electronic and visual act known as DROELOE has captivated stages from their native Netherlands to far corners of the globe on a relentless tour and release schedule over the past two years. First opening for bird dad San Holo and gaining dominance in the festival circuit before landing their own extensive headline tour, the souls who comprise DROELOE (Vincent Rooijers and Hein Hamer) have much to be proud of.

I was lucky enough to be residing in Brooklyn, New York at the time of the two-night The Choice We Face tour run at The Music Hall of Williamsburg. I consider myself to be a DROELOE lifer, having extensively covered the duo's rise and even flown to Amsterdam to see them play at a variety of ADE events in fall 2017. There was and is something so purely magical about the wistful nostalgic tone of their music, it possessed me enough to get on an transatlantic flight to chase the high. To see DROELOE grow and flourish far past those ADE showcases and pop-up events has been a distinct pleasure for me as both a journalist and fan. And the two-night run in Brooklyn was a triumphant culmination of all Vincent and Hein have accomplished. 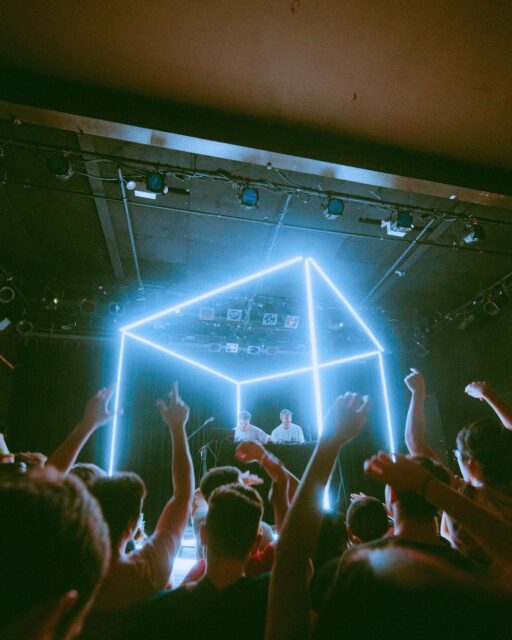 The weekend's sets showcased a selection of some of the genre's most illustrious rising stars on support duty, with luminaries Sober Rob, Fytch, Duskus, and TAILS expertly warming the room for our dynamic duo. DROELOE's signature cube visual rig stood proudly for the openers, but didn't reach it's full blaze until our headliners took the stage. From the first breath to their joyous encore, I can confidently say my mind was properly blown by each of the two nights I spent with those two Dutch lads in Brooklyn.

The set opened with arguably my favorite DROELOE song, the ubiquitous "zZz." If you scroll all the way to the very bottom of DROELOE's Spotify feed, you'll find this magical track nestled right at the beginning of 2016. A spellbindingly magnificent first effort, indeed. What's consistently struck me about DROELOE is their ability as relatively fresh artists, all timelines considered, to have already cornered such a distinctly signature sound. The first time I heard "zZz" was like an awakening my creative musical mind never knew it needed. My eyes and ears were suddenly opened to something entirely new, a bold new beginning suddenly entering my horizon. This was music that made me dance hard but also feel things I didn't know electronic music, or any music for that matter, could. My hopes and wishes for sublime sonic connection held tightly in their fists, these two unassumingly sweet boys have taken me on the emotional roller coaster ride of my life over the past three years. And "zZz" was just the beginning.

For music I've played clear into the ground like A Moment In Time, to sleeper favorites like DROELOE's incendiary remix for Charli XCX's "Boys," and newer singles that have become instant classics like "Many Words" and "Backbone" (may it never not be satisfying to scream into the dark - "better grow a fuckin' backbone"), no moment felt remotely stale. That's the sign of music with true staying power; seeing it come to life before your eyes purely deepens your appreciation for melodies you've traced into the sands of your mind more times than you can count. As I swam through each evening's sonic delights, DROELOE's high tech cube was alit in a kaleidoscope of differing patterns and speeds to suit each track's mood, whether delicately blinking one side at a time, or cascading with brilliant undulating waves of light at the set's high points.

The dreamlike occasion came to a close with an assortment of tracks that sent me into the emotional stratosphere. From the iconic "Kitsungi" to bitbird's megacollab "If Only" and San Holo's "lift me from the ground," every soul-stirring track remotely associated with DROELOE was invited to the party. Devotees of bitbird will feel me when I say, what other two tracks could come together to close an evening of this magnitude quite like Taska Black's "Dreaming" and DROELOE's "Sunburn"? Perfection barely scratches the surface.

So where does DROELOE go from here? Back into the lab to create more magic I can only hope. And the next time we meet, I'm quite sure it will be entirely unique and special, striking the blissfully nostalgic note only DROELOE can. Until next time, "Get on a train and we'll be strangers again."