1 year ago by Valerie Magan

Hood River alt-rock gems flor are back with a new video for their latest single, "dancing around", the second taste of the band's forthcoming sophomore album, expected later this year via Fueled by Ramen. While previous single, "slow motion", took on a more synth-rock, flavor, this one sounds like flor's earlier work, mellow and easygoing, but with a little more guitar thrown in. And the video, directed by longtime collaborator Jade Ehlers, features the band shrouded in familiar warming blue tones, brandishing instruments and inviting us to share in their happy dancing. Twinkling lights and clever visuals turn this otherwise mellow, delicate song into a danceable, fun time. Watch below.

Made up of band members Zach Grace, McKinley Kitts, Kyle Hill, and producer Dylan Bauld (re: Halsey's Badlands), flor saw their musical beginnings as Sunderland, enjoying moderate success when "My Generation" and "Every Night" were featured on MTV's Finding Carter. But, after years of Sunderland, the boys felt a revamp was in order, and changed their name to flor, rearranging roles and moving towards a more indie-synthpop sound.

Along with "dancing around", flor has also shared dates for a massive 31-city US tour presented by Live Nation's OnesToWatch, set to kick off Sept. 10th at Phoenix's Crescent Ballroom, and wrapping up a month later at San Diego's Music Box. flor has just wrapped a massive 39-city North American tour supporting Andrew McMahon in the Wilderness and are currently on the road for a headline tour of the United Kingdom and Europe. See the tour poster below for a full list of upcoming fall dates, and catch tickets on sale here starting Fri. May 10 at 10AM local time (with a special fan presale on-sale starting tomorrow). 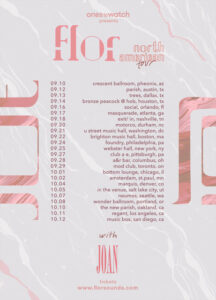