Majestique returns with a funky "How U Been" [Premiere]

2 years ago by Lauren Jefferson

Following the release of their first full-length album last year, the mysterious duo Majestique returns with a new single called “How U Been.” The Dutch producers are known for their addicting 80s inspired dance tracks. However where Majestique’s album boasts a dark, brooding analog synth sound, this new track lifts the veil to reveal a fun and light-hearted vibe with funky synth melodies and hooks.

The two partner up with close friend Miles Hi for “How U Been.” They wanted to do something different after the 5 years spent working on their album. Miles Hi came up with an idea for a song about a “person that everyone meets in his or her life that is kryptonite” and Majestique decided to translate that relationship into disco. Throw in some addicting nods to pop with a tinge of R&B and hip-hop, and you’ve got “How U Been.”

Along with the release of the new tune, Majestique had designed a piece of art from designer and illustrator Maria Lazebra. She describes it as “a woman trying to catch a man with her tentacles, while he’s flying away on a rocket to planet Majestique… it takes the form of a disco ball and is where the aliens are having a good time.” It’s a good time all around. “How U Been” is out now via Dirty Soul Music. Be sure to follow along with Majestique who promise more in the form of singles and EPs this year. 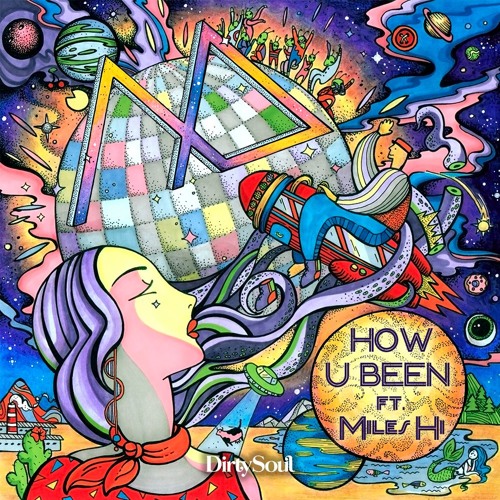