Firing back up the grills this year, Dirtybird Records, the tastemakers of booty dropping bass and underground house music, are back this season with their Dirtybird BBQ series. To get fans excited for more of their outdoor shenanigans and tasty BBQ sauce covered house, DIRTYBIRD Selects is preparing to release the fourth edition of their Dirtybird BBQ 'Filthy Flavor' compilation. This year's mix will include tracks from Desert Hearts legends Mikey Lion & Sacha Robotti, Dirtybird's own Justin Martin & Will Clarke, German Brigante, Kill Frenzy, and feature Dirtybird debuts from DJ E-Clyps, Kolombo, CODES, Josh Brown, Bess Maze, Ed Lee, and Hatiras feat. Isis Slam. EARMILK has the pleasure of sharing an early preview of the upcoming compilation series with this exclusive track from New York DJ/producer Codes titled, "Birds and The Bees." Check it out below:

Drop some fat bass, add a subtle dial tone, set up a solid off-hand vocal sample and we're cooking with Dirtybird fire. Just send it home with a few stuttering samples, a barrage of infectious rhythms, warm undulating melodies and "Birds and The Bees" is a quirky house track made for this compilation. Funny enough, it seems CODES may have unknowingly stumbled upon it when he was first putting it together.

“Last year I ended up at my friend Trigon’s apartment in Brooklyn with Mark from Solardo after his show at House Of Yes. We chatted about everything from the Law of Attraction to what genre the music I make is. I replied, "I make house music”. He said, “But what kind?" I explained there are tons of other genre influences like hip-hop, jungle, reggae etc... and he kept asking me to be more specific. Finally “Just play some for me and I’ll tell you what it is” came out of his mouth so I played him a few tunes. He gave me some sweet ideas regarding distortion and finally just blurted out “Dirtybird” after the 2nd or 3rd tune I played. As he walked to the door to head out, we slapped each other up to say goodbye and he looked me in the eyes and confidently said: “See you on the Dirtybird stage mate”. I've always been all about relentless hard work mixed with some of my little knowledge of the Law of Attraction, but this extremely late night conversation inspired me to really study it and push my music to new levels. Fast forward 6 months later and I received an email saying that the Dirtybird family wanted to sign one of my favorite jams I have made to date. I have had “Sign Records to Dirtybird” on my whiteboard in my room for a couple years now and I cannot express how fucking awesome it is to cross something like that out.” CODES

The Dirtybird BBQ tour will kick off in Austin on May 19th, followed by a return to Oakland on June 2nd, and Los Angeles on July 8th. 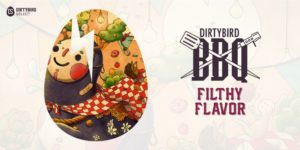