A-Trak is known for a few things: his world-famous, championship winning, record setting DJ skills, and live sets that have impressive energy and an range in the types of music he brings to the party. Today, the Montreal artist has announced a new project with Chicago's YehMe2 on a project that declares, "we're open for festival season."

A-Trak and YehMe2 have released 2/3 of their project together, an EP called Skat Men. Out for free download via the Fool's Gold Records SoundCloud page, we can listen to "Neo Wokyo" and "Take Me 2 The Barbershop" with Wuki. "Prayer Hands" will be next, but streaming just as a preview for now.

At first listen, we know exactly what Skat Men is all about. Just a few seconds into "Neo Wokyo," we are flooded with quite a translation of festival energy into one track. But it's not your standard crowd rouser, with its inclusion of a familiar and nostalgic whitewashed commercial stock sample amongst its beats. "Take Me 2 The Barbershop" has a familiar sample of a different kind - one you might remember from Missy Elliott's "Lose Control," from Cybotron's 1983 track "Clear."

A-Trak and YehMe2 are heading out on a few tour dates together to celebrate their new collaboration, with information below. 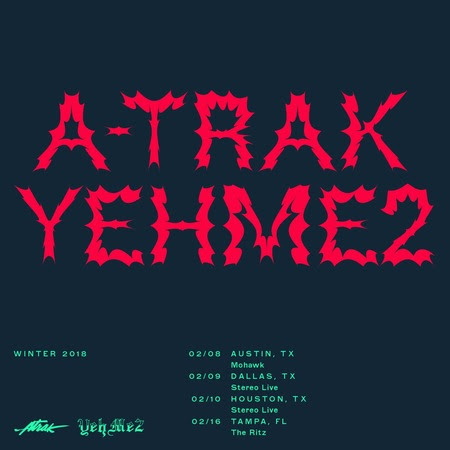