3 years ago by Wendel Genosa

The art of the remix is one that holds a strong significance within the electronic music industry. As Kirby Ferguson promotes in his “This is Not a Conspiracy Theory” video series, he states “nothing is original” and “everything is a remix”. When it comes down to the basics, the remixing method is simply a borrowing and recreating of art, an expression of perspective in sonic output. With this in mind, the remix has always been an essential staple in the electronic music history, as it has opened doors for artists to reimagine material which may have inspired them initially. If you’re an avid electronic music listener, the name RAC (Remix Artist Collective), is likely to ring a bell. Also known as André Allen Anjos, the popular artist has found great opportunity in remixing a large range of artists of varying genres including Phoenix, Tokyo Police Club, Bloc Party, Tegan & Sara and more.

Originally, RAC was founded by Anjos in 2007, with the intention of establishing an artist collective that catered to an alternative sound in remixing that didn’t particularly fall under the “club” style that audiences were accustomed to. Over time, few members had joined and left the project, eventually leaving RAC to Andre himself, allowing for him to completely lead the project and paint it with his signature indie-electronic twist. From winning a Grammy, to finalizing his sophomore album and preparing his upcoming live tour, this year has been an absolute whirlwind for RAC. To discuss and celebrate his recent endeavours, EARMILK had opportunity to chat with RAC, to catch up and reflect on his full length album released today, titled “EGO”.

The Portugal native spent most of his youth in his birth country, which heavily influenced the way Andre had digested culture and music. While indie rock band were heavily on the rise for majority of American adolescents, Anjos was alternatively exposed to electronic music and cited tracks like Daft Punk’s “Around the World” making an indelible imprint. Regarding his upbringing, Anjos stated, “Culturally, Portugal was lagging a bit behind and I say that in the most loving way. The radio was not corporate yet, it didn’t focus content around top 40. Eventually, a whole new world of music opened up to me with the introduction of the internet”. With many of his most popular remixes centralized around indie pop/electronica artists, RAC mentioned that this particular fusion of indie rock, electronic and pop elements was one he naturally gravitated towards. When initially considering original music with the RAC project, his first instinct was to produce dance music to supplement his DJ career. In time, Andre would eventually find his niche in crafting instant classic pop meets indietronica material.

“When I sat down to actually write something, it came out a lot different. It came out slower, a lot of more pop oriented. I kept trying to write dance music and it wasn’t happening. My brain was telling me something to choose something more natural and true to who I am more than the practical side of things… At the end of the day, it’s a goal of mine to reach a lot of people. Pop music seems like a happy medium in between those worlds. To have that pop structure, simple on the surface but still be as creative as I wanted with all those intricate details in the music.”

In celebrating his roots, RAC now holds the title as the first ever Portuguese Grammy winner, with his rendition of Bob Moses’s ‘Tearing Me Up’ winning the Best Remixed Recording earlier this year. And though growing up in Portugal may have played a role in what music RAC was exposed to, it never shifted his plans in pursuing music as a life-long career. The artist now resides in Portland in his home studio (and if you haven’t peeped into it yet, it’s an audiophile’s paradise). Commenting on location, Andre agreed to the notion that where you are can make some impact on the creative process. And though most would argue that New York City or Los Angeles would be a the hub to kickstart a career, Andre unveiled more opportunity in creative freedom in Portland as a recent graduate stating, “Portland was an affordable city when I first moved here. It was a good spot to mature as a musician, with minimal financial risk. I had an opportunity to build something without going broke. After college, Brooklyn was definitely an option. But New York didn’t give that financial freedom to try something a little different, especially as a college graduate. Being here gave me the chance to live fairly cheaply and actually full on pursue music.”.

And since the commencement of RAC in Andre’s college years, the project has torpedoed to a reputable household name in the scene. Evolving from remixes, Andre eventually opted to explore the idea of producing his first full-length LP Strangers in 2014. And in juxtaposition to his release today, RAC cites several points of contrast noting, “It was called Strangers because I didn’t really know anyone that I was working with, with few exceptions. In EGO, I made it a point to work in the same room as a lot of these people, to go into the studio together and be in the same space.”. Andre even noted the vulnerability that comes with working face to face, mentioning that being in the same room was “beneficial” and that “when you’re locked in a room with someone, you’re talking about life and beyond. It’s something I missed and isn’t as apparent when doing things through the internet.”. This raw human connection is what makes the album stand out as a cohesive work of art and EGO’s authenticity highlights points of personal progression from Andre himself.

“I kind of like how ambiguous the word EGO is. It’s about personal exploration and you question, what does it mean to be an artist? I channeled a lot of things that I went through since the last album, which was a lot. The name of the album can be seen in a negative light, but I liked that it was open for interpretation. Also, it just looked interesting aesthetically under RAC.”

Additionally, Andre put in a lot of thought into the visual concepts for EGO and snagged the opportunity to work alongside Los Angeles based visual artists Sing Sing for EGO’s album art. After scrolling through the artist’s visuals across social platforms, it’s apparent there’s a strong aesthetic in the way Andre represents himself. Through primary colours, geometric shapes and a dash of retro-esque fade, Andre’s visual representation is uniform across all fronts. And what few may know is that prior to studying music in the States, RAC had toyed with the idea of studying graphic design. “I was really torn between both of those worlds and graphic design eventually sort of manifested into my interest in photography today, which I’ve also always liked.”. In Sing Sing’s concept for album art, he creates a minimalist physical wood object that mimics a simple graphic design but holds much more complexity in it’s tangible nature.

“With Sing Sing especially, I didn’t tell him what to do. I showed him the album, explained the concepts and he came up with a physical object made of wood with multiple layers. One of the things I appreciated on their take is that if you look closer, you see the wood grain behind the paint. The shapes aren't exactly perfect and there’s shadows in there. I compare directly to the music. On the surface it can be accessible and fun. But, if you dive deeper into it, there’s something more.” 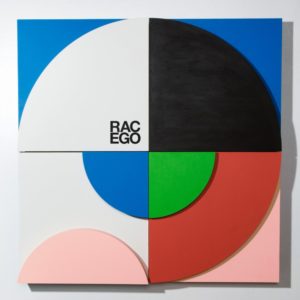 All in all, the album is quite the treat for veteran RAC fans and those who’ve yet to discover his discography. Setting itself aside from many fleeting singles these days, Andre emphasizes the fact that EGO is an album meant to be listened to in it’s entirety, “My hope is people will listen to it in one sitting. In a single focused industry, it makes sense to do so. At the end of the day, I love albums and I’d rather do that.”.

“When I was 14 or 15, first discovering music, those were the experiences I remember. It wasn’t about listening to the latest singles, it was about the album and dissecting that. Albums were so important to me growing up and I’m hoping my album makes the same impact to some 15 year old out there.”

EGO’s upbeat, top down, positive vibes are the perfect segue into the midsummer peak. Aside from it’s bright atmosphere, RAC has fortified a truly organic sound balanced with tasteful and enticing production. Easily mimicking the abstraction in EGO’s artwork, the album is accessible perky pop music on the surface but holds a delicate craftsmanship and apparent timelessness. With a-list talents including Rivers Cuomo, St. Lucia, MNDR, Joywave included, EGO marks a shifting point for Andre. RAC feeds and nurtures the EGO in his new album, flipping it’s connotation as he truly moves in the direction of constructing a classic sound.

Catch RAC on tour where he'll be performing a live set this fall.