4 years ago by Rachel Steer

If you don't know who WRLD is, now is the time to get educated. As one of the artists to watch for 2017, the recent high school grad and electronic producer kicked off the year strong with two collaborations (one still in the works), a San Holo remix and the release of "Everything", out today via Monstercat. The track flirts with some new sounds from David Lawson, a.k.a WRLD, while still incorporating his signature future sound.

"Everything" isn't the only thing WRLD has released within the past few days. His collaboration with SMLE, "Stranded", soon to be released, coincides with a joint tour. EARMILK was fortunate enough to ask the young artist a few questions ahead of what is sure to be a huge year for him.

As previously mentioned, "Everything" works with some new sounds. The track has a taste of drum and bass along with future elements, but it wasn't always meant to be this way. WRLD says the Ashdown vocals were meant for a future bass track, but he wanted to experiment with a cutty minimal style and thus the song began to change. Using a drum and bass demo and tweaking the track in the Monstercat head offices in Vancouver, it evolved and "Everything" was born. Listening to the track a few times, I noticed the lyrics were quite romantic and wondered where the influence came from. "Just in time for Valentine’s day right? I don’t know what influenced Ashdown to be honest, but I really wanted to make a drum and bass track that had both a poppy and a clubby structure. The verses, choruses and the bridge are there but it still drops. I really wanted to make the track an adventure with some unexpected things going on, it fits the lyrics really well in my opinion!"

Last Friday, WRLD and SMLE also announced "The Stranded Tour", a joint tour between the two artists which begins next month. The tour promises live sets and new music from both artists, a decision that just makes sense according to WRLD. "When I was trying to learn how to DJ it really hit me that most of my music just wasn’t written to be played by DJs. The majority of my music is pop songs, so performing them live really seemed the best step to me. I’ll be playing keys, drumpad, launchpad, a little bit of live vocoder and a ton of nice visuals. It’ll be super fun." The joint tour came about since WRLD and SMLE wanted to tour around March, were fans of each other's music and thought the idea of a duel live set would be a different experience compared to just seeing a DJ.

WRLD is no stranger to collaborations. With "Stranded" still in the works and other tracks released within the last few months, I asked him what the collaboration experience was like for him and if any more were coming up this year. "Most of my collabs are with vocalists, I don’t always like to give the control over the production away to another artist. I’m not the greatest lyricist and I really can’t sing so it’s always nice to find new vocalists to work with, there’s tons of undiscovered vocal talent out there. With the SMLE collab however it was a really natural process. They sent a really cool demo to me and it was super easy for me to just start working, in a few days the full structure and idea was already laid out, something that usually takes me weeks to do since the arrangement is always the hardest part to me. My main focus has currently been the live show but since SMLE and I will be on the road together for a month I’m sure Stranded won’t be the only thing we’ll make together!"

Working with both Monstercat and Heroic, something that is still surreal to the young producer, 2017 is looking to be a big year. WRLD is looking to experiment with his sound more, as well as focus on songwriting and possibly a follow up to his Chase It EP. So far, so good for him and we're eager to see where the year will take him.

Check out "The Stranded Tour" dates (more TBA) below. Tickets are on sale now via WRLD's official website. 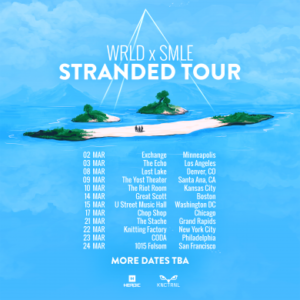