With all of the turbulence in the music industry, it truly is something special for an imprint to turn five years old. To celebrate Power Plant turning five, founder La Fleur is releasing Power Plant 5 Years VA, a five track compilation with the likes of Acid Mondays, Knutsson/Berg, Justin Massei, Jesper Ryom, as well as La Fleur herself contributing a track. With La Fleur playing Movement this past weekend in Detroit, EARMILK was able to sit down with her after her daytime set on Friday to talk about the compilation, her label, and where she wants to go from here.

I arrived early on Friday, as La Fleur played the third timeslot on the Made In Detroit stage sponsored by THUMP. Even though it was only two hours after opening and the sun was blistering hot, her set was packed with dancing fans of her Berlin sound. After what can only be described as too short of an hour, La Fleur closed out her last track to the sound of a thankful crowd. She met me on the side of the stage, drink in hand, before we walked to the media area, the only place in the entire festival where the pounding techno wouldn’t drown out all recordings. 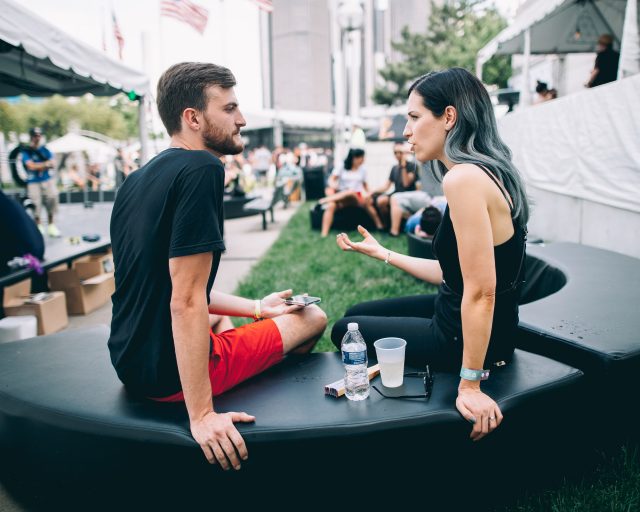 Before we sat down, she asked if I could tell that she was nervous performing for such a large crowd at such an important festival. I couldn’t. No one could, she was fantastic.

On Movement and Detroit, La Fleur gave this analogy:

Detroit is one of the homes for techno—It will always be its home—like when mothers have their kids, here’s the base, of course the kid is going to go and do stuff all over the world, which is now what is happening in Berlin. I think it’s such a great that Detroit is having this festival, that’s one of the most important things still for techno and the techno scene.

When talking about her set that had just concluded, La Fleur reflected on how her productions, which are primarily house music, differ from her sets, which feature a lot more techno. “I’m coming from a house background. I started out with soulful house…so I love that stuff.” Expanding, she said, “I think I have played more housey before, but my forthcoming stuff that isn’t out yet is a bit more techy, so I’ve been heard in my sets being a bit more techno. So I think it goes hand in hand but the productions that are out haven’t really correlated with what I’m playing yet, but I will always play both house and techno.”

However, “Caged,” her track on Power Plant 5 Years VA, out via Power Plant on June 6th is pure soulful house music. The vocals of the track are particularly striking, going “You are of the sound of two grasshoppers making love outside my schoolyard. They’re dancing to the music of you.” With little prompting La Fleur recounted how “Caged” was an extremely special track to her:

The funny thing is that that vocal, I used it actually when I produced music for a fashion show. It’s spoken word…I found it and just loved it. So I used it for the fashion show, but then I was like, actually, I really like the vocals, I’m going to make a full track out of that. So I decided to, and having the vocals be there was really the inspiration for the track.

The fashion show was the House of Dagmar’s 2014 Spring/Summer collection for Mercedes Benz Fashion Week in Stockholm. You can check out a video of the show and the original use of the spoken word below.

Moving on from “Caged” to the compilation as a whole, La Fleur talked about the other artists. “All of are old and new friends of mine who supported the label, and who I support because they make great music… it’s new people but Power Plant has always been that. I started a label and not so many people knew whom I was. It is all about showcasing artists that I believe in.”

Although La Fleur has had a residency at the famous Watergate techno club in Berlin for years, her life wasn’t always on this track. Originally, she was working as a pharmacist while trying to DJ on the side, but it wasn’t enough. She explained, “I asked my boss for three months leave of absence, thinking ‘Ok I’m going to Berlin to get inspiration.’ Now it’s eight, nine years later, I’m still there, so it was good,” she laughs.

Berlin has been wonderful to La Fleur, and thinking back on the earlier days, “First of all, I had a dream; I always wanted to have a record label. I wanted the creative freedom in everything from the music to the artwork…to be able to do whatever you want.” That’s a freedom she truly enjoys, doing exhibitions with the artwork of her releases to doing the distribution of the label’s first EP all by herself, learning as she went along.

In the coming years, the Power Plant will see a resurgence of new artists, with the five-year compilation showcasing some of the artists likely to be back on the label in the future. La Fleur was animated as she talked of direction the label will be taking in the coming years. “I had a one-year break with the label because I had to figure out some things. How I want to do it, what direction I want to take it in.” That direction is forward, with at least two releases coming from her on label each year. This year, she’s re-releasing “Flowerhead,” the track that started it all, with an updated version as well as two remixes from two women, who are remaining secret for now.

In the end, Movement was definitely a success for La Fleur, closing out our time together with, “I would love to come back for the festival and just as a visitor too, so I’m crossing my fingers for that.”

We are too La Fleur. We are too. 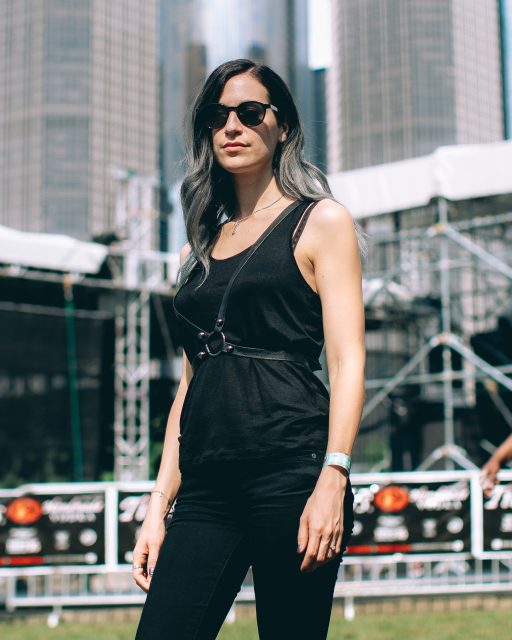