Generally there are only a few artists who have been able to leave their mark on the one genre that they fall into throughout their careers, however Jon Hopkins has impacted nearly all facets of the electronica, experimental and, more recently, the dance scene. As a multi-talented electronic musician and producer, the void that Hopkins fills lies in creating music in an area that is rarely explored, while also gaining wide recognition for it. Some may consider his sound to border techno and other heavy electronic genres, however this would be selling him short, as Hopkins has created such a wide array of music through his run. For instance, his older solo material (music written when he was just 19 years old) is nearly unrecognizable if all you have heard from the artist is his latest Mercury Prize nominated album Immunity.

Starting out in the backing band for Imogen Heap at the age of 17, Hopkins has since found wide solo success as time has gone on, leading to production duty for artists such as Brian Eno, Coldplay and Purity Ring. On top of this he has collaborated on material with Natasha Khan (Bat for Lashes), Hayden Thorpe (Wild Beats) and King Creosote. In all, Hopkins is an artist who is in full control and is also in the process of writing the follow-up to his most successful and well-received album to date. The possibilities seem endless for the 36 year old who puts on one of the most out-of-body live shows around.

With his usual live set up of Kaoss Pads, a stellar light show and visuals to go along with his textured music, Jon Hopkins carried FYF through the evening and into the dark of night. Coming on after Flying Lotus' DJ Set in the Los Angeles Memorial Sports Arena, it was instantly apparent that there were no expenses spared from the FYF producer Goldenvoice. They had not only included all of the expected amenities in the pit (ground floor) section of the venue, but there was also an upper level where fans could sit back and reflect to Hopkins' organic and forward-minded electronica. We were lucky enough to catch up with the prolific artist before his show. 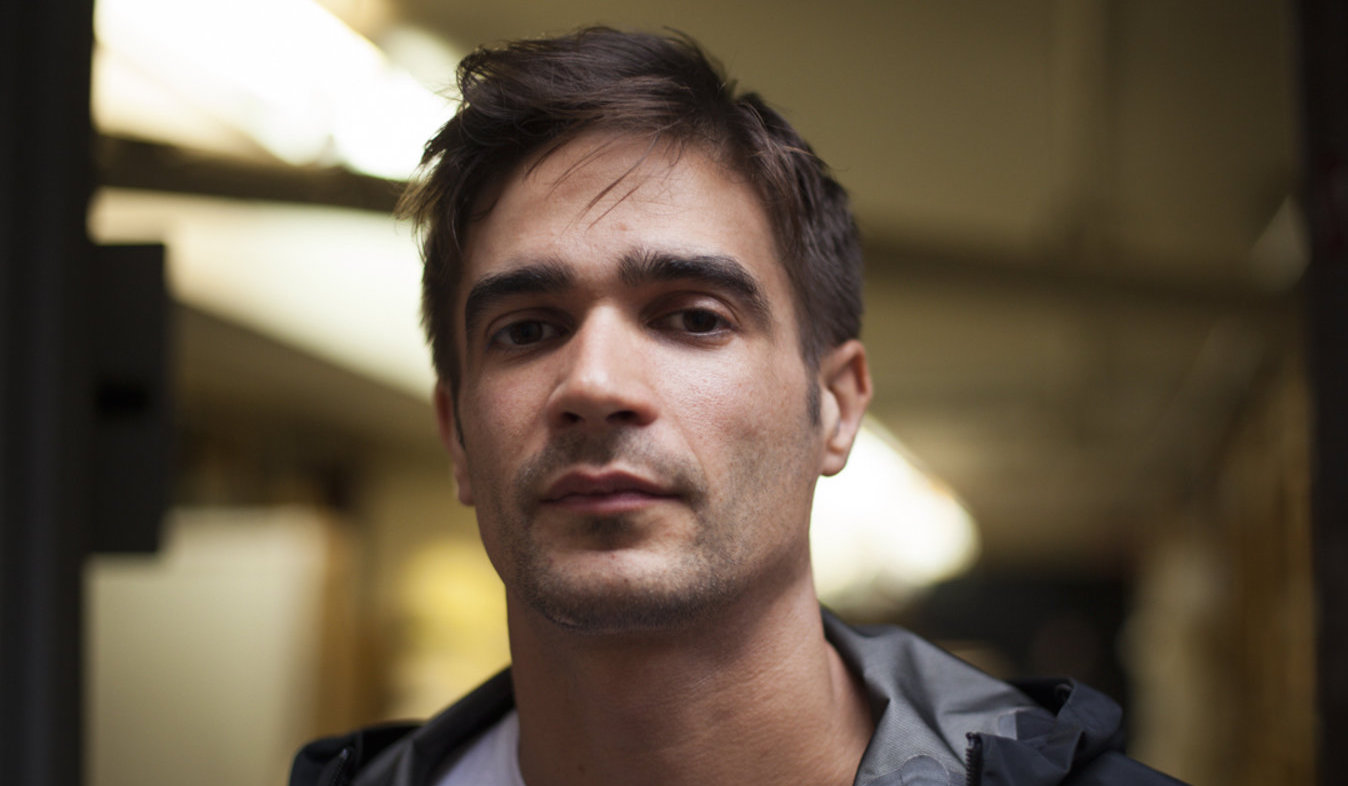 EARMILK: You have been in the electronic scene since 2001 and in the time both your sound and the entire electronic music landscape has changed drastically. What would you say has had the biggest influence on your sound through that time?

Jon: It’s been different things at different stages, really. I’ve done four solo albums now and each one has been really different. It is dependent on my life at the time, what I’ve been doing. I think each one has a radical shift, as they have always been three or four years apart. The most recent one is the most upbeat one, that was the logical progression because for the one before that I toured a lot, finding myself in club settings and started getting more into the hypnotic techno rhythms that came out in the music. Before that, Insides was more influenced by the previous three years of my life — it didn’t have any touring in it at all and it was more about a lot of exploratory listening, a lot of film recordings - I was doing more experimental stuff. So, they are reflections of what I have encountered, really, like—I guess—with most people.

EM: Of all the places that you have been able to perform your amazing live sets over the year, when you think back are there any festivals or venues that stick out and if so how come?

Jon: There’s quite a few. It’s been an amazing few years, particularly the last two years doing 170+ shows for this record. There’s been so many highlights. I remember in Croatia playing at this festival called Unknown Festival and they timed my set so that the sun hit the water at the exact right time. It was this perfect timing—I was in the middle of my favorite tune and the sun actually hit the water right in the middle of it and it was a real special moment.

Over the years, I think, maybe one of the all time highlights was the Sydney Opera House where I did an improvisational jam with Brian Eno and Carl Hyde from Underworld and a few others like this band called The Next who are heroes of mine. That was like a dream situation, 3 hours of purely improvised music for three separate audiences

EM: What was your favorite song that came on right when the sun hit the water in Croatia?

Jon: It was “Open Eye Signal”, which at that time had just come out and it was getting a wider audience than I had for anything else, so it was quite a euphoric moment.

EM: Because you don’t sync your sounds when playing live, how would you explain the rush of performing on stage knowing that you don’t have a safety net to fall back on?

Jon: It’s not that simple really, there is a kind of safety net. If everything goes really wrong I have things I can do [laughs]. Because when you play to a crowd above a certain size you can’t stop and go ‘oh, sorry’ and start again. If I hear something is drifting out of time, or a loop is going wrong, I will just change it up quickly and move on. You’ve got to have a balance of safety net and potential for disaster. You want to straddle that line because you can’t allow it to get boring to you and at the same time you can’t allow it to get self-indulgent and bore the audience. So, somewhere in between those two things is the balance I’m looking for.

EM: While you have the ability to dig into really heavy electronic music, you also peel back to the beautiful acoustic melodies in your live set from time to time. Do you gauge the styles you perform based on the event and/or audience?

Jon: Kind of, yeah. The shows where I have had an actual acoustic piano and strings have been very rare and seated. Most of my shows in recent months have been more like this - larger festival affairs - which I don’t really focus on the quiet stuff. There will still be the euphoria of the melodic moments, but I don’t really have much piano going on and obviously no live instruments. It has been really fun over the last couple of years to develop the set to get the confidence to change it for every event and there is always something different these days.

EM: While Immunity may be the first taste of your music that many of your fans had the chance to listen to, if someone were approaching your music for the first time only now, where would you want them to begin?

EM: You have mentioned that you want to write a new album during your free time this year. Have you begun the process? And if so, where do you currently see it going?

Jon: Yes, I have begun it. It’s been a very technical process so far because I decided to move platforms from Logic over to Ableton - or, at least to learn what Ableton can do for me that Logic couldn’t and maybe combined the two. So, at the moment I have just been learning it and getting my head around it, discovering how different it is and how much flexibility it has. It’s like a whole new instrument I’m learning is what it feels like. It feels like I picked up a guitar for the first time. So, at the moment there’s very little actual music coming out of it - there’s a lot of little experiments and almost studies in how to use this new thing. That’s where I am right now.

I have over-arching ideas for how the record will sound. But, what I have discovered in the past is when I have thought I learned where it is going it doesn’t go that way. So, when I started writing Immunity I had no idea it was going to be a lot of techno tracks. The first track I wrote is called “Form By Firelight”, which is a very different rhythm on the slower half of the album. And then the techno front-running tracks came a bit later. So, I don’t know where this one is going yet, but in my head I can kind of see it.

EM: With all of your collaborations with a plethora of amazing artists, are there any others that you would like to work with if given the opportunity?

Jon: Yeah, I’d love to work with Sigur Ros. I have worked at their studio and recorded an EP there and I have been a huge fan for years and I’m going to meet them soon. Not in order to discuss anything, but I am excited to just say ‘hello’ and hopefully one day something will happen from that.

Thom York would be another. I mean these are obvious choices that I am sure that everyone would say if you had asked them. And also, Justin Vernon is another hero of mine.

EM: Well, given your background and who you have worked with in the past you have the potential to work with anyone.

Jon: It would be awesome. I’ve had a lot of different female vocalists on my tracks over the years, but I’d like to go beyond that.

EM: Knowing that you like to manipulate acoustic instruments to create your own electronic sounds, have you ever considered bringing live instruments into your own sets in a festival-like setting?

Jon: In a festival it doesn’t really work. When I’ve used a real piano on stage, or strings, it’s been in a concert hall setting with seats and with an audience who are in an exact right zone for that kind of music and who are expecting that kind of music. But, at a festival you get a lot of people who maybe don’t know stuff as well or they know the big or louder tunes only. So, what I would try and do-usually-is just create the most uplifting, more bold set at a festival.

I did this album with this Scottish singer called King Creosote a few years ago and it’s a very very quite album - folky, mostly acoustic. We tried to do it at some festivals — maybe two or three — and it just gets drown because where we’re sitting right now you can hear two stages going on. Imagine the quietest music. You just can’t get people into that, it just doesn’t work. I think festivals to me are more of a party thing because I tend to get put on late. Maybe if I was playing in the middle of the afternoon it would be different, but I don’t get those slots.

EM: Are there any acts that you are/were interested in catching live at FYF?

Jon: Yeah, I am very interested in Simian Mobile Disco, Flying Lotus — I know both are new additions — and also Purity Ring. I would like to see Bloc Party, but they are on at the same time as me now, so… yeah, that’s it. Tomorrow, I imagine I may be asleep. I’m jet lagged. We just got back from Japan like 24 hours ago and so my brain is eight hours out from here.