The UK's Rudimental has helped redefine pop and dance music since the release of their debut album, Home. Combining soulful, catchy melodies with live electronic drum and bass, the four-piece band has become famous for crowd-rocking singles and live performances. Today, they've released their first single off of their forthcoming album entitled, "Never Let You Go." With Annie Mac giving it her stamp of approval by deeming it Hottest Record in the World on Monday, the single will be available on May 1st via Big Beat Records ahead of the album's June 14th release.

"Never Let You Go" has classic Rudimental energy to it, but has a surprisingly subdued and melancholy vocal, creating a totally new environment around the record's listening experience. A perfect reintroduction to the band, there's some new depth that we haven't seen from them layered in, leading us to wonder what else we can expect from the LP. 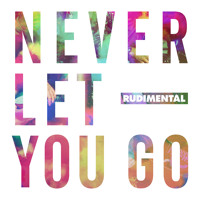