If you're a dance music fan like I am, you may have had an epiphany in your life where you realized, "I like house music." In the early 2000's, that moment could have been involving various dance artists who were simultaneously taking over the UK charts, including Stonebridge. An original pop house artist, his hit "Put 'Em High" landed just about everywhere, including compilations that defined 2004's music as a whole. This week, with the launch of HK Records, a division of Stonebridge's home for many years – Ministry of Sound – Dutch producer Atilla Cetin has given us an updated remix to remember. Out officially on November 24th, this version of "Put 'Em High" features a deep, down under bassline, repurposed piano progressions and sampling that honors the original. Hopefully, this will make some people fall in love as well. 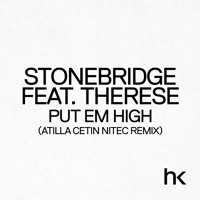