6 years ago by John Smith

School is finally out (for most), the temperatures are steadily in the 90 - 100 range here in California, and gym attentiveness has went from last to first priority. Sounds like summer partying is in full throttle. It also happens to be america’s favorite holiday in a few days. Independence day. Yes , commonly known as the Fourth of July. Commemorating our independence from the Kingdom of Great Britain. Now I’m not too sure how it was done back in 1776 but, my guess is it wasn’t too different from how we celebrate today, mind you a few technological advancements here and there. With that being said EARMILK has teamed up with super crews: Northern Nights, An Ten Nae, Dials, and 1015. To you bring you THE BIG BANG. This event will be held at 1015 Folsom July 3rd in San Francisco. Jam packed with genre bending artist such as CRNKN, Dimond Saints, Jacuzzi and many many more! This night is guaranteed to prep you for that 4th of july turn up we all have been waiting for.

CRNKN, once known for being at the helm of the trap movement at the start of its birth into electronic music culture. Has transcended into a new sound completely, and its not a bad thing. Get familiar with his new and improved sound:

Dimond Saints, bay area natives, hailing from the ever evolving city of Oakland have a fresh future bass sound that is extremely soulful in nature. Here are a couple tracks by the elusive duo:

Jacuzzi, coming all the way over from Honolulu, Hawaii has been making some big waves in the future bass scene for some time now. His sound is so addicting you'll have no choice but to dance . Here a few of my favorites by this talented producer: 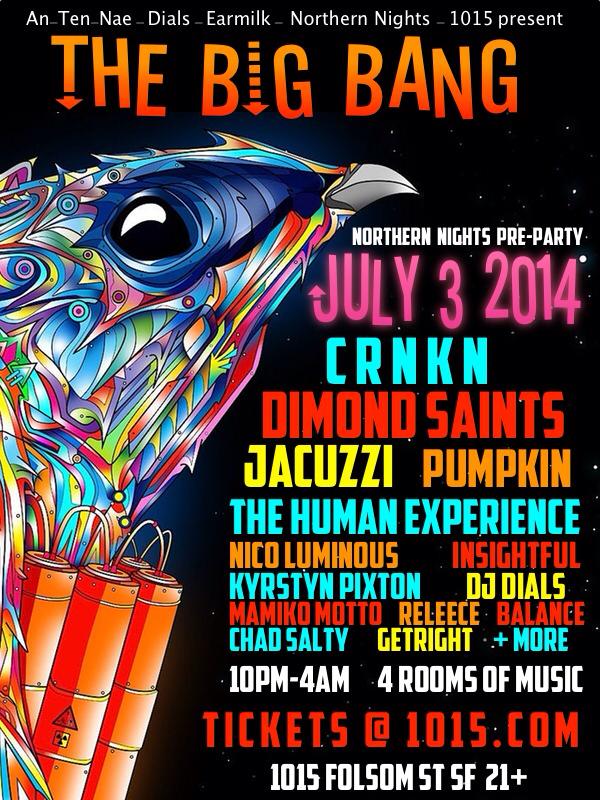