Every day the deluge of releases continues, with credit given to some who don't deserve it and a lot of hard work  going unnoticed. Yet every so often something novel crosses our path, and today that breath of fresh air comes from the British duo known as NAPT. Deriving success from a diverse sound palette, the twosome doesn't seem hindered by conventional thoughts on music, a prime example of which can be found in their November mix. Spanning everything from hits to obscure remixes, the mishmash of genres, popular tracks, and NAPT's own work finds cohesion through capable mixing.

Such skill has not gone unnoticed over the past year, as prized labels, like OWSLSA, Fool's Gold, and Rising Records, have been keen to release the award-winning team's work. Interestingly enough, many of their awards come from recognition in the breakbeat scene, through beatport charting tracks and the Breakspoll Awards. These beginnings have clearly carried over into their current work, demonstrated in the heavily percussive and stuttered rythms of "Tyrannosaurus". Dropping today on Rising Music, the track begins with an eerie vocal sample, layered over drum machine beats, building until it falls into this syncopated synth and drum march.

"Tyrannosaurus" comes off the two part Circles Vol. I EP, which also includes the track "Cafe". Look for the followup to this release in the not too distant future. 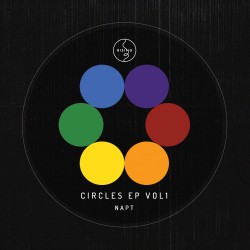