7 years ago by Malcolm Bouzi

New York rap group RATKING had a great 2012, signing to XL Recordings and re-released their Wiki93 EP. In comparison they've kept things relatively quiet this year, but things are starting to pick up. Just last week they released "GAUCHOS," a collaboration with Black Dice's Eric Copeland for a 2014 Converse compilation. Now they've just dropped a video for their single "100," reminding us that their first full-length album is in the works.

Listening to the track, you get the sense that the crew are aware of just how good they are and how much they are getting slept on. Wiki and HAK trade vicious bars, with the former's commanding flow standing out instantly. The New York vibe and reggae influence are unmistakable. With so many other acts from this city grabbing headlines, we hope that it's a case of "when" rather than "if" RATKING will get the attention they deserve. The group are currently on tour with label-mate King Krule, so be sure to check if they'll be hitting your city soon. Peep the Arvid Logan directed visuals for "100" below. 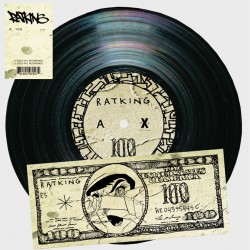