One of the most artistic ways music can be utilized is through film. Sometimes the emotion felt in a song can be augmented through visual complement, oftentimes seen through full-length soundtracks or scores. French member Anthony Gonzalez of M83 has recently been diving into producing original soundtracks for films, most recently contributing original music to the  Tom Cruise feature length Oblivion.

For his brother Yann’s first feature-length film, You and the Night, Gonzalez works with Morgan Kibby of  White Sea to produce a lavish, harmonic and instrumental score called “Ali & Matthias”. The song is romantic and light, filled to the brim with strings and epic acoustic accompaniment. The success of this fit is no surprise, as M83 has just recently taken their hit track "Midnight City" platinum via MUTE Records. Check out the trailer for You and the Night here, it will be digitally available November 19th. The group has no upcoming live show dates, but we can be sure that something epic is on its way. 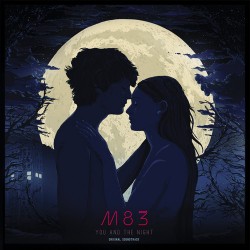