Dusky emerged onto the scene like most well-seasoned producers. They went to school for music production and composition, grew up in the UK rave scene, and have produced everything from drum 'n' bass to atmospheric progressive house. We met up with the duo, Nick Harriman (above left) and Alfie Granger-Howell (above right), for a chat after their set at Dim Mak Studio in LA, stop number six of their 2013 North America tour. Before you ask, yes, Nick is no less than 7-feet tall and Alfie is the nicest dude on the planet. In fact, they were both nice enough to talk with us into the wee hours of the morning about everything from their start as Solarity to the current state of their production setup and their new EP, Careless. They've got another few stops before the tour ends at TomorrowWorld, so be sure to catch them before it's too late.

EARMILK: On this tour, you're playing both the small venues like Bang Bang in San Diego and the massive festivals like TomorrowWorld. Do you have more fun playing for a smaller dedicated audience, or a bigger more-diverse crowd?

Alfie: Both have their merits. The pure spectacle of people reacting to your tracks on a big festival stage is amazing, but at the same time you don’t get that intimacy like with the smaller venues where you really connect with the crowd. Less scale, but more depth of connection with the smaller crowd. It’s nice having both.

EM: Where do you practice the most experimentation with new music?

Alfie: Probably in the smaller groups, because you can start taking it somewhere harder and try out some promo stuff.

Alfie: You can feel the vibe of the dance floor better when you’re standing right next to everybody rather than judging it by the amount of hands in the air at a distance.

Nick: Big venues are great for high-energy tunes with big buildups, while the smaller venues allow you to bubble along for longer drawn-out moments.

EM: Seeing as you are guys are a duo, are there certain aspects of performing and producing that you delegate between the two of you?

Alfie: On the DJ side, we’re both very equal, usually one song or two decks at a time. On the production side, it’s pretty evenly spaced, but we definitely specialize in certain aspects based on our backgrounds and what we’ve studied in music production and composition. It’s not nearly as clear-cut as Nick focusing on some things and me on other things. We pass files back and forth and let the other tweak it. Like, Nick will be tweaking the mix down and he’ll hear things that I can’t hear. He just has a better ear for it than me.

Nick: We both start ideas all the time. We’ll play them to each other for opinions. Sometimes it will sound horrible, but moving this here and that there makes it much better. We both equally contribute, there’s that balance, but then we bring a different aspect of refining it and building it into a track in the end.

EM: What was the deciding factor when transitioning from Solarity to Dusky?

Alfie: It was kind of funny, actually. We had a collection of tracks and had an album in mind (this was when we were still Solarity). We were only about halfway through making the album when some people at Anjunadeep pointed out that it was quite different from anything we had done before. They suggested we release it under a different name, which sounded strange at first. We thought about it and it made total sense since the album was so different from what we had done before.

EM: How has your sound progressed since the beginning?

Nick: I think subconsciously it’s become more groove-based, but not as a matter of being like, “Okay, we want to make more groovy house tunes.” When we started Solarity, I was making more drum ‘n’ bass and hip-hop. The tune that turned me on to house music was this Prydz remix of “1983”. I thought the tune was absolutely sick so I started making progressive house. Even though there wasn’t really a scene for it and the only label was Anjuna, I didn’t care. As I got more into making and listening to house music the groove-based side of it progressed, but the melodic aspect has remained and is absolutely integral to what we do. I think that’s what has become the defining factor between the two, where Solarity focused more on the melodic “hands-in the air” side and Dusky on the more groove-based side.

EM: The most recent Anjunadeep compilation hit #1 on the US Dance charts while Anjunadeep04 and 02 didn't. What do you think changed in the last year?

Alfie: I’m not sure, they all have pretty much the same sound. I think it’s about how tastes change, how dance music in the U.S. has exploded in the past 4-5 years. Now there’s an appetite for the less pop-y stuff.

Nick: The sound of Anjunadeep is definitely not a trendy sound. It’s definitely a niche sound.

Nick: I don’t think that many people need to like it in order for it to hit #1. People read into that way more than they should. You have to consider the time of the release and what is already out at that time. Above & Beyond have a huge following so if the music is good people will buy into it. It’s rather unusual, but there’s nobody else doing it quite like they are.

EM: Tell us about the new album, Careless, that's coming out in a couple weeks. What makes it stand out from your previous productions?

Alfie: We’re exploring new sounds and avenues—more techno-y. It’s not a massive departure from what we’ve done before, but it definitely has new melodic ideas and different grooves. It’s one of those albums where we wrote the tracks separately without an EP in mind, then added some of the tunes we had lying around. It was quite hard to choose which ones to gather up for an EP.

EM: Does that happen often?

Alfie: That’s usually how it happens, where we have one tune and need to find something we’ve already made to pair it up with. Like, “Have we finished that idea? Can we include it?”

EM: What happened with “Sunsets & Dolphins”? It got loads of pickup from being in Disclosure’s Essential Mix, but didn’t make it into the EP.

Nick: We weren’t totally convinced that it belonged with the sound of Careless. What happened was Guy called us up and asked us for everything we’d been working on—the newest stuff. He picked out "Sunsets & Dolphins" and everybody loved it. But it didn’t feel like the right tune for us to put out after Nobody Else and Vanishing Point.

EM: What did your initial production setup look like, and how has it progressed since then? Any hardware?

Alfie: Well we don’t use any hardware, so the only thing that has changed since we started has been the monitors, plugins, and interface.

EM: What monitors are you rocking?

Nick: Waves Renaissance for squashing the vocals a little bit and the Logic compressor for sidechaining.

EM: Seeing as it’s 4am, I’ll leave it to just one more question. Do you have any advice for new producers on how to get their music heard?

Nick: I think that if your music is good enough to send to labels, people will take note. We get sent so much stuff that it’s often difficult to go through it all, but if we hear something good we’ll play it and reach out to the artist. If you think it’s good, just keep putting your stuff out there and people will pick up on it.

Alfie: It’s often about finding people who do similar things to whatever you’re doing, like labels that are putting out similar stuff. Even those labels just starting out. It’s really good to get opinions from those that matter. I know that when we started out we messaged the smaller labels as well as the bigger ones.

Nick: It sounds really cliché, but patience is a virtue in terms of working on your stuff. For beginner producers, it’s really easy to lose the objectivity of what you're doing. You can make something you think is really cool, but really you look back on the stuff you made three years ago and realize that it’s shit! Whenever you make something you’re really excited about, put it on your hard drive and make something else. Come back to it in six months and be like, “Is that actually good or not”. People are too eager to put out music quickly. It’s better to make something and sit on it for a while.

EM: Well, thanks for spending your entire evening with us! 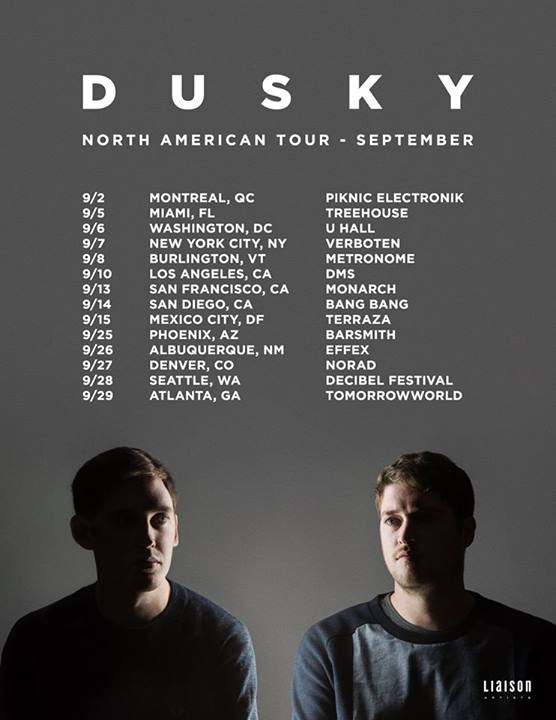