LA based beat maestro Falcons turns Missy Elliot’s “She’s A B**ch” into a modern day beast or as he calls it a “one hunned & ten bee pee em shit.” The track originally enthused airwaves back in 1999 due to its dark and ominous landscape created by none other than glorified producer Timbaland. Now Falcons comes in with his smorgasbord of musical influences to create the perfect late night dance track while still staying true to the originals murkier roots. With a knack for bouncy Southern club tempo’s and flawless ability to fuse R & B and hip-hop elements with bits of world music Falcons continues to push boundaries and deliver fresh music suitable for both on and off the dancefloor. 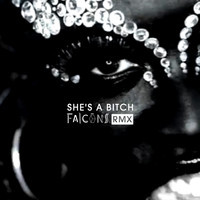