Once you have had the joy of stumbling on a good thing its on natural to crave that thing and/or feeling, The very same can be said about the music from Brooklyn collective Phony Ppl. While a new finished project from the collective has yet be unveiled (not to say we're growing impatient), last month saw the release of collective member Elbee Thrie's noteworthy solo project 53,000.

The mixtape finds the jack of all trades NYC native parlaying his many talents ultimately culminating into a solid 18-track project that encapsulates a rich and colorful dynamic of sound and lyrical content. Contributions on the boards and mic from fellow Phony Ppl cohorts comes as no surprise as the flow and vibe of the tape closely mirrors the soulful, favorable Golden Age hip-hop eccentricities, of which have aided in bringing indie adoration to the cutting-edge BK outfit.

From Elbee's transformative penmanship shown on the mic to this crooning on hooks Elbee Thrie's 53,000 stands as a piece of artfully crafted tape in its own right, worthy of standing beyond the shadow of Phony Ppl's own creative body of work. Stream a personal favorite of mine "Meditation" above and listen to a continuous stream of the tape below. To grab a digital copy of the remastered version of the mixtape (available on Phony Ppl's Bandcamp) follow the download link provided below. 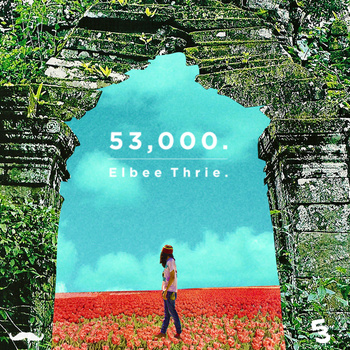