Last night, Yung Skeeter, B.o.B, Matt & Kim, and Santigold all descended on Boring, Oregon to bring a little life into the self-deprecatingly titled town. Thanks to vitaminwater and Fuse TV, we got to watch the livestream of the event, which brought together four artists from four separate quadrants of the genre map for an eclectic and spirited concert.

Backed up by Shawty Slim's DJ skills, B.o.B gave a fierce set, unabashedly flirting with his audience of screaming females. He easily filled up the venue with a sharp selection of songs from throughout his discography, aided in no small part by how locked in the Georgia-based rapper was with the live-produced beats. Accompanied by a pair of lady dancers, B.o.B delivered some especially fancy footwork on "Nothin' On You". though both "Strange Clouds" and "Airplanes" stood out as crowd favorites.

Indie-pop couple Matt & Kim played set two, shifting gears abruptly into their signature candy-coated anthems. Matt crouched over a pair of synths while Kim hammered away at her minimal kit, but neither musician could stay seated for long. Before the end of the first song, Kim was already jumping up onto her bass drum, slamming her sticks together while the crowd clapped along.

"I'm going to start this next song and about five seconds in I'm going to ask you a favor," said Matt before launching into the brass intro to "Let Me Clear My Throat" and instructing everyone to jump. (A DJ Kool cover in its entirety, unfortunately, was not in the works.) Whatever your take on their particular niche, it's hard to frown on the humor that these two pour into their music and performance. "This is my partner in crime—and partner in the bedroom," said Matt between songs. "Shouldn't we emphasize partner in the bedroom first?" quipped Kim.

Backed by Max Headroom-styled musicians and dancers dressed like the French maids of some distant future, Santigold opened her set with the stomping "GO!" off her most recent record, Master of My Make-Believe. Decked out in what may well have been the skin of a diamond-printed bear, high-tops with chain loops, and a ring with an eyeball-sized false diamond, Santi White got tangled up in her own set dressing from the start, dragging long gold streamers around the stage as her dancers dragged her off her feet. But despite the costuming, dancing, and even the pantomime pony that made an appearance midway through the set, Santigold's powerful vox easily took the spotlight. Any artist that can take a sponsored event and make it more about the music than the product is an artist worth our attention. By her fourth song, Santigold had invited as many audience members as she could fit to dance with her onstage for "Creator". It was a joyful noise, as brash and exciting as Santi's live show has been heralded to be.

Watch footage of the concert in its entirety below. 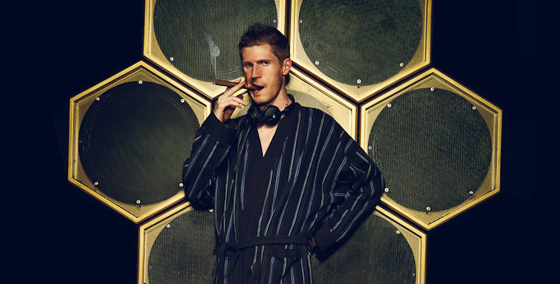