The world of DJ and studio tech is filled with all sorts of alien-like interfaces encasing wordy functions that sound like they've been ripped out of a scifi film. It's no surprise to see hardware companies taking the same progressive approach as the visionary artist in scheming up the next piece of gear that will satisfy their ever expanding needs. KMI or Keith McMillen Instruments is one such company that aims to lead the innovative front with their latest product the QuNeo, a unit that looks to usher in a new standard of more flexible midi control. Like many other worldly pieces of tech these days, the QuNeo story starts on Kickstarter. A site where inventors post new projects on the horizon and ask for funding to make their forward thinking ideas a reality.

Initially, the head developer Keith McMillen pledged for $15,000 to get his invention rolling. They raised over ten times that amount. With celebrities like piano composer Herbie Hancock and songwriter John Paul Jones of Led Zeppelin and now Them Crooked Vultures chipping in, the company shattered their goal and had $165,000 in hand to share their vision with the world. So what was everyone rolling the dice on? 3D multi touch midi control. The ability to not only track what pad is being touched, but what part of the pad is being touched with an added sense, location information. This opens up a wave of new mappings, new possibilities, in the most compact and mobile package designed to hit the road's cramped DJ table or slot into a studio limited on space. Whether or not the end of the road checks out, we'll have to take a closer look and see if KMI is in the game for innovative glory or being the latest overrated gimmick. 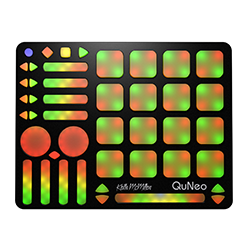 The good: Incredibly versatile programming, ability to program pressure, velocity, and location information. Software templates for a wide range of DJ and production software get you on your feet quickly while the QuNeo Editor allows you to customize the unit from top to bottom. Can act as an MPC style drum machine or sequencer. Thin yet sturdy enough to take to the gig, about the size of an iPad.

The bad: Call us greedy but we'd love to see more! More sliders and rotary pads would be great in a future sister model so you wouldn't have to shift through preset banks. Faders can be a bit too sensitive and jittery at times when responding to touch, an adjustment that can be made by future updates to the software.

The deal breaker: A truly one of a kind controller. KMI's QuNeo uses its unique 3D multi touch capabilities to literally multiply the possibilities, what looks like a 4x4 grid can be mapped to be an 8x8 grid with 64 triggers. Multi touch sliders and rotary pads are a breath of fresh air for gear enthusiasts and an alluring way to control software for anyone looking to get started. The QuNeo Editor puts the pen in your hand so you can completely redesign the controller with edits to pressure and velocity sensitivity for your own custom feel and needs.

Let's start with the bare bones, the QuNeo has 27 programmable controls divided into three different groups: pads, sliders, and round rotary sensors. The lit up 4x4 grid of pads is without a doubt the staple of the unit, this is where you'll be getting your hands on the most. Like all of the QuNeo's MIDI utensils, the pads are pressure sensitive and can send velocity as well as location information via USB to a computer for your software of choice to read and act upon. This is the meaning that Keith puts behind "3D", the third dimension is more like a third sense that the controller uses to detect exactly where your finger is touching the surface allowing a single pad to trigger many different actions. It does so by being able to output X and Y position data which is split into 4 quadrants for each pad. That means one pad has four triggers, branching out of the 4x4 grid the QuNeo can be mapped to be an 8x8 grid with 64 triggers in the pads alone. But if you're looking to tap a beat out on the fly, you would want some room to drum with in which case the QuNeo can also be the 4x4 grid it was built to be. Call it living a double life, the QuNeo can be your giant arsenal of triggers or your MPC-style drum pads sitting somewhere between the Native Instruments Maschine and Akai's APC 40. 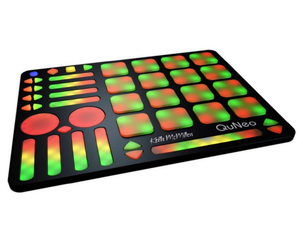 There are nine sliders on the QuNeo, four run vertically while another four run in a horizontal direction. At the bottom of the grid you'll notice one large slider that often takes the role of crossfader in software mappings. The sliders feature the same location technology as seen throughout the unit and use the distance between the starting point and where your fingers touch to determine how much you'll effect a mapped parameter. KMI is quick to get you on your feet with included mapped presets that cover nearly every piece of software I can think of from Ableton, Logic, Reason, Traktor, to even Korg iMS20 and Beatmaker on the iPad. Of course DIYers can get their hands dirty by creating their own custom mappings with QuNeo Editor, an editing application that lets you build your own presets to relieve even the smallest annoyance. Get picky with adjusting the pressure sensitivity of just a single pad, or switch up the placement of notes, it's all there to make your live performance more fluid and your workflow a breeze. To give you an idea of how the QuNeo can be integrated into a DJ setup check out KMI's video demo using Native Instruments Traktor.

Now was it the dry vocabulary or the monotone voice that brought you back here? The truth is that the QuNeo is a cutting edge piece of hardware that can sound a bit complicated and intimidating on paper, but I assure you there's no steep learning curve when you get your hands on this thing as KMI's presets have done the mapping for you. In the video above you saw how the two spinning rotary sensors act as jog wheels for Deck A and B in Traktor, allowing you to see your music breathe on the interface right before your eyes. The bottom sliders act as VU meters as well as controls for deck and monitor volumes with the crossfader sitting underneath the pads. Up top you have the horizontal sliders controlling the frequency of each deck's filter and dry/wet control for the two FX groups. The pads are split into two with the top half setting loops according to size and planting cue points while the bottom plays, syncs, and calls your cues to keep the party kicking. The arrow shaped buttons act as shift keys to create alternative functions and also blink to let you know about things like whether your effects or loops are engaged. All of this is to keep your eyes away from the laptop and fixed on the QuNeo, and the unit does a great job of preventing you from aimlessly looking at a computer screen.

I couldn't resist wrapping up this review with a stress test done by our friends at DJTechTools. Talk about putting it through the works, these dudes torture the QuNeo by waterboarding it with beer and tossing it out the window. Regardless it still manages to hold its own which is always a plus, but don't let this be a reason to Sham Wow your friends by letting them take a piss on your new MIDI controller. As you can see the QuNeo is thin and light, about the size of an iPad and that doesn't take away from the fact that it is also quite durable and sturdy. With a tag around 200 dollars, you're getting a bang for your buck at a price point that often sees companies cheap out on making firm reliable hardware. All in all, Keith McMillen's QuNeo is a success story that starts at the grassroots of the music tech scene but what's more important is that it has yet to end. The QuNeo Rogue is the company's recently announced project aimed to "Free the DJ", a wireless add-on to the QuNeo that could see DJs getting the crowd involved in their live sets. Whether or not the upgrade manages to catch on, the QuNeo is a grab on the basis of getting behind a company that refuses to quench its thirst for innovation.