The electric Jack Davey, one half of electronic soul duo J*DaVeY, has kept busy this year with the release of two solo EPs and the recent premiere of the visuals for "Shit Gets Deep" here on EARMILK. Today marks the release of Davey's crown jewel, her debut solo project, L0-F! D'lux. The creative culmination of her new double EP, L0-F!, both of which revealed distinctly different traits from her personality with Side A being released October 2, and Side B following on November 6, L0-F! D'Lux includes both EPs and three new songs.

Acquiring the necessary skills to express her artistic vision, the constantly evolving Davey learned to play the guitar which made it possible to showcase the guitar-heavy sound found on her solo double EP. Divided creatively into two parts with Lo-F! Side A produced exclusively by Miss Davey and in the vein of Iggy Pop and Side B by her beau Joey Strat of The Knux, Davey and Strat's work comes full circle with the release of L0-F! D'lux.

Described as, "a sonic shift to a darker, grungier sound, characterized by hybrid combination of indie rock and modern grunge production", Davey's solo debut finds the artist exploiting her newfound level creative license and taking experimentation to the next level.

Stream Jack;s "garage-rock opus" in its entirety below and be sure to head to iTunes to grab a digital copy of  L0-F! D'lux. 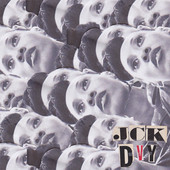