It's no secret that since the release of his debut, 1999, Joey Bada$$ has been one of the most recognizable names to come out of New York's roster of rising emcees. The prodigious Brooklynite came out of left field with lyrical depth over production that was, more or less, before his 17 years and still managed to "Wow" the rap internet. Today, Bada$$ releases Rejex, a compilation of tracks that rode the bench when drafting up his debut effort. The tape includes production from Madlib, Cyne, the incredible Lord Finesse and Pro Era member Chuck Strangers. Here's what he had to say:

1999 rejex" is a compilation of tracks that didn't make it to my debut mixtape "1999" (obviously). I decided to put this project together because I have a lot of unreleased material that I didn't want to keep from the ears of my fans and supporters. I also have a couple of tracks on here I did when I was 15 years old ("little rachel", "indubitable", and "silent knight") and I want to show people the progress I've made in a couple of years. The remaining songs ("flowers pt. I", "catharsis", "panty raid", "fantum" and "update") are tracks I dropped prior to the release of '99 as promo only. I look at "rejex" as my more experimental side compared to '99. Putting together these two projects even taught me a lil sumchin about my evolution as an artist and individual. Watch me go from "Joey B4 DA $$" to the "Joey BA DA $$"...... If you know what eye mean.. Haha 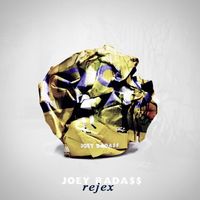