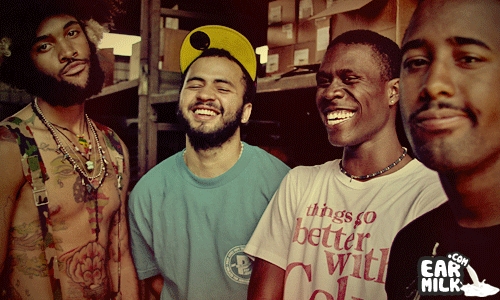 It feels like a lifetime since we last heard from the eccentric Cali rap crew OverDoz. However, the DEST is back and in full effect with release of their new cut "Lauren London" which the crew previewed with a hilarious trailer back in early May. Despite drawing humbling and equally understandable comparisons to alternative hip-hop pioneers The Pharcyde, the lively South Central crew has an undeniable style all their own from their lighthearted raps and consistently dope visuals.

In addition to some chilled out carefree lyrics, their new track, produced by Iman Omari (of THC), features vocal work from fellow LA native Brittney Dorn. Let's all collectively cross our fingers and toes and hope this track is the prelude to an upcoming OverDoz. project. In the meantime, check out the playful video directed by Calmatic which features light sabers, bong rips, comprising positions and a cameo appearance by Syd Tha Kid.