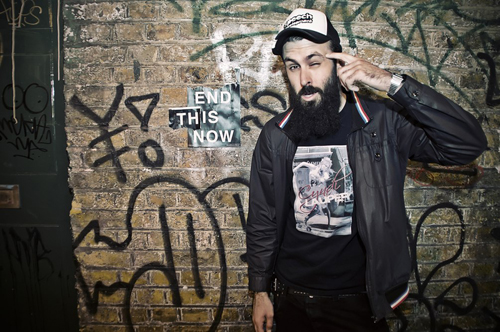 My first experience of Scroobius Pip came a few years back when I stumbled in on a live show. Upon Scroobius Pip reciting his first line, the crowd went from a buzzing mash of chattering heads to attendant silence within 30 seconds. Since that fateful day, I believe it was a Thursday, a nice day, I have been looking forward to his new noises with anticipation.

First time round listening to the new album I was both impressed and also a little thrown by the new direction of production he has taken. A punk/hip hop fusion runs throughout, with very few tracks being something you could call outright hip hop, British or otherwise. Although Scroobius has never really been a typical hip hop guy. With producers Yilla and Worgie drafting in collaborators including Zane Lowe, Renholder, and Steve Mason, you can see where this punk/hip hop hybrid has been conceived and birthed.

Also refreshing to see is it does not appear Scroobius has sacrificed any of his relentless social commentary and story telling abilities in favour of making some nice hooked-out catchy lines that are out for the mass appeal.

No-one can argue with the wordsmithery skills that Scroobius Pip holds. His lines are well thought out and continue to hold your attention as any great story teller should. Twists and turns galore and the odd surprise are all present.

Although he does verge on preachy and slightly self-righteous at times. Track "Death of the Journalist" is basically a middle finger to the eye of blog culture, under the premise that it has ruined real journalism. "You're so vain you probably don't know this album is about you" may arguably be my favourite line of the track.

I AM aware I am the type of person he is laying into throughout the track, being a blogger and all, but I do also think he might have misssed the point of what separates a blogger from a journalist.

"Soldier Boy Kill Em All" takes Soulja Boy's hook and makes it, well, better.  Despite its playful origin, the song's message is deceptively serious, however not something that hasn't been described by others before.

"Broken Promise" is by far my favourite track of the album and for me is maybe the most honest and approachable for the listener. What Scroobius does so well is give insight and explanation to situations which are common yet tough to describe for the common folk. Situations that can apply to all of us in such a way that these things suddenly make sense whilst at the same time bringing us all back down to earth and making sure our egos don't become us. We are reminded that we all share more experiences than we think, however evil or horrible we may think ourselves at the time.

Scroobius seems more frustrated than anything else throughout this album, bar "Feel It" which is a saucy commentary on a one night stand ensuing after a party. Maybe this is a form of self therapy for him, unleashing his frustrations concerning the established and existing systems both social and government born.

Regardless of inception the album is a stand out piece of British hip hop. Devoid of catchy hooks and sing along choruses, this is something you listen to and take away a message from each song. As long as your switched on and up for a bit of learning get your ear eaters around this one tout suite.