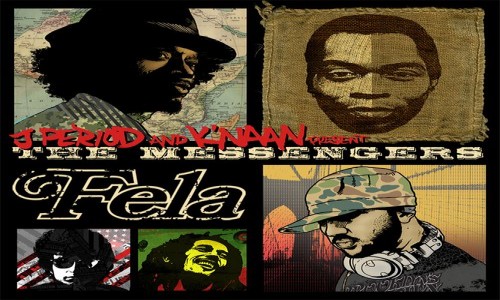 If there is one thing that's become obvious by now, it's that Earmilk appreciates a good remix. But one thing we appreciate even more is a good musical history lesson. We find this in The Messengers. A few weeks back, J. Period, the incredible DJ behind, amongst other things, Kid Cudi and Consequence's "Buggin Out 2009" teamed up with the incredible MC hailing from Somalia, K'naan, to drop a digital EP of what will come to be known as The Messenger Series (Fela Kuti, Bob Marley, and Bob Dylan). The EP included tracks from each episode. They recently dropped the first installation entitled Fela which includes remix's of some of Fela's best songs with ill lyrics from K'naan...T.I.A!!!!!

"Who's Fela?", you may be asking? Fela Ransome Kuti was more than just a musical artist. The man was a human rights activist, a radical political frontman for Africa and Africans everywhere and he is the godfather of what we know today as afrobeat, the perfect blend of soul and funk with African rhythm's and instruments. With that said, listen to what K'naan has to say about this particular messenger and do more research on the revolutionary for your own knowledge.