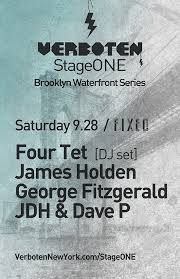 It’s been quite an eventful summer for the people behind Verboten, yet they aren’t ready to call it quits just yet as final installments of their 2013 StageONE series will continue with a line up of underground leaders to warm up the Fall season. This time around they transform the old Schaefer Brewery into their new designated location at Cine Magic Riverfront Studios. Staying true to their Williamsburg waterfront roots, the location is situated on the Williamsburg, Brooklyn waterfront and will feature both indoor & outdoor rooms with 10 hours of nonstop music, top-notch production, food vendors and breathtaking skyline views of Manhattan.

To kick off the FIXED showcase this Saturday Setpember 28th they are bringing in electronic powerhouse Four Tet and things have gotten quite steamy in recent news. His 2004 hit Late Night Tales, which featured a compilation of 60s psych rock, experimental loops, electro-jazz and more has been reissued. However this was not on the command of Four Tet as he took to Twitter saying "[It] has nothing to do with me... they never told me about it and not heard the remaster." Not one to leave his fans disappointed, Kieran Hebden, told us to "just ignore it" and download it for free here. Also he is offering up a WAV file of his Jimi Hendrix “Castles Made of Sand” cover fresh off the mix.

Joining Four Tet will be British techno sorcerer James Holden, Domino Records’ George Fitzgerald, and the partners behind FIXED JDH + Dave P. Sadly StageONE will come to a close on October 12th  with the legendary Solomun.You can find out more information here and be sure to grab your tickets. See you there!

And if you're a little strapped for cash and wanna come out. Enter our contest here. 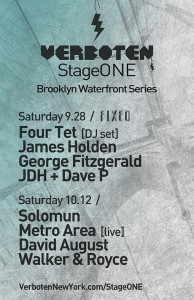