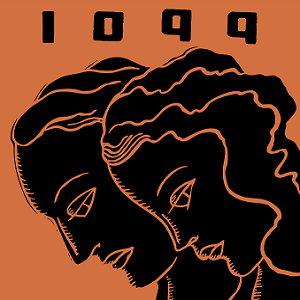 Let's take a step back and survey our surroundings, shall we? The past few years has been dominated by electronic music. Period. It doesn't matter what you seen on TV, it doesn't matter who gets what awards. Behind it all is electronic music. It's easy to forget and grow out of lingering genres this day and age. Besides, who doesn't like those awesome synth sweeps and booming bass that will shake your jeans loose? Then, there is music where you enjoy a hot beverage while you stare blankly into the ran behind a big window. Unfortunately, the latter is less appealing in most cases.

You can hear this type of musical construct through the works of post-rock band 1099. This four-piece band is based in Trondheim. Honestly, there isn't too much information on them out there, since they have basically taken their first breath of life as of last month. They released their self-titled debut album on February 22 via Doognad Records. As mysterious as their background, I didn't really know what to expect when listening through this particular album. With no prior knowledge, I dove head first into 1099 and tried to understand who they are exactly through their melodic hooks and explosive drums.

The album opened, much to my pleasure, with a soft piano, a modest brass instrument, and caressing ambient effects. "Your Future", for a good portion, goes through a good ambient droning. Not until the halfway point where a high-pitch screech breaks whatever meditative state you had. That's when things start to pick up. Those elusive and much anticipated drums finally make their dramatic entrance. Honestly, the screeching was nearing the tipping-point of my tolerance, but then the drums and the brass started drowning it out, and ironically pushing it into the background. I thoroughly enjoyed this particular tune in that it didn't prime the listener with the typical post-rock crescendo-core fashion.

We are then immediately thrusted into a warlike anthem with the beginnings of "The Grand Design". This track is much more energy-filled, seemingly to pick up the slack from the opener. For a good 2 minutes, 1099 throws a million pounds at you, but then eases off with melodic and nifty picking which is backed up by some nice drumming. At that point, we hear a bass clearly for the first time which does wonders for this particular song. The bass in any band acts as the stronghold foundation and the suave butter to smooth across any audio canvas. The energy put forth rollercoasters throughout the song, as instruments come in and leave as they please. The 12 and a half-minute song does get a little repetitive, but there are some intricacies between the layers that makes the song enjoyable. It ends on with high-energy and on an abrupt note to start the next tune on a completely different level.

Switching back to ambient mode, the first "Machine Fire Ghost" consists of nothing but haunting effects. However, a mimicked heart-beat enters the spooky yet majestic ambient swirl. The emotional scale starts jumping when the strings enter, giving the track a melancholic feel. On the other hand, the clean electric guitar picking offsets this particular vibe, giving the song nice dynamics. The slow tension created by the heart-beat and ambient droning is soon left in the dust towards the midpoint of the song. Everything comes to life as the tempo quickens in synchronization with the hand clapping. Melodic guitar picking shifts into the spotlight. At this particular juncture of the tune, I came to be a fan of 1099. The quickened beat keeps level, though the energy increases. The guitars maintain their place. Ambient and coarse vocals are echoed into the layer-fest. Tension is high. Then suddenly, rough strings and a heart-beat is all that's left.

This next track really reminded me something off of All India Radio's latest album Red Shadow Landing. "There Is No Such Constellation" doesn't start off with tension building ambient or energy-peaking crescendos. It gets right into it with serene guitar sweeps and subtle jazzy drumming. Clean strings enters pointedly and elevates the song to a whole new level. But it's quickly dropped into a more mysterious undertone as the song progresses. Cue the climb. Each element slowly builds together in harmony like a bunch of Legos bricks stacked upon each other with different colors, and yet, it is sturdy in its highest form.

"Wake" is a monster of a song, in terms of length. It rivals the length of Godspeed You! Black Emperor's tracks, though it sounds nothing like them. We encounter our first actual singing briefly in the introductory seconds of the track. Once again, melodic guitar hooks, modest drumming, and an acoustic piano are the main drivers for the next few minutes of the "Wake". It then explodes over the fence near the middle of the song, dropping most of the elegant picking and substituting it for guitars with overdrive couple with crashing symbols and rides. What's an explosive chapter without the contrasting quiet period afterwards? 1099 resets themselves, except this time they focus on the guitars layering on top of each other. Eventually mystique strings join the guitars as well. There isn't anything too mind-blowing about this audio odyssey, but nevertheless, it's a great listen.

The following track, I can safely say, is my least favorite. It's the black sheep of the group. I am slightly puzzled why 1099 had decided to incorporate a song like "Iron Fist (Death Is Here)". There is coarse, sharp yelling for good portions of the song. It transcends into a type of screamo, which is a whole new genre I know next to nothing about. I'm all ears for new sounds, but it doesn't really cut it. Compare to the thoughtful, emotion inducing songs that come before, "Iron Fist (Death Is Here)" seems to lack substance or passion we have previous felt. I think they are just trying to prove that they can switch up their style as they please. Honestly, a majority of the track feels and sounds like any typical hardcore band that I manage to stumble across. Don't get me wrong, I appreciate the talent and technique needed to pull of the sweeps and chord mashing, but this particular track shouldn't belong with the others. At least not on 1099.

As if to reaffirm my belief, 1099 does one of the biggest 180s I have seen in a long time. After the noise-core track comes the soft, ambient beginning of "While The City Sleeps". A piano punctuates itself slowly while a brass instrument plays in a subtle impromptu-style. A jazzy style drumming rumbles slowly and merrily in the background. Then unexpectedly, a classy female vocalist silkily enters in the style of some musical. The lullaby-esque style of "When The City Sleeps" is a nice touch. The energy and tempo never increases at any time of the song. Instead, it coasts at a cruising speed of serenity, yet there is still yet something deeper within the song that has yet to be unfolded.

1099 is a band that has great potential in the future. They have showcased their great talent and execution in their debut album which has sold me to become a fan of theirs. As a big fan of post-rock, there are too many instances where bands of the genre all blend together as they utilize the same sounds over and over. 1099 has managed to stick out with their unorthodox usage of ambient, metal, and the oxymoronic traditional post-rock structure. Though there are times where it starts to fade in creativity, 1099 makes it up else where in the album. In an age where bands are created every day, it's becoming much harder to find their own sound. Especially in such a focused and interpretive heavy niche like post-rock, a band must figure out who they are and what they want in order to standout from all the others. 1099 has found their sound. Now they just need to grab it and hold on to it for the ride to come.