Modern pop music has become so fraught with appearance and social media that it seems many pop stars are prime examples of form over substance.  Breaking the mold from an increasingly vapid genre, Chelsea Collins was an accomplished musician and songwriter before she ever had aspirations on being the next pop star.  The attention to detail in her songwriting and composition are evident wherever you start in her discography and her new collaboration with rap superstar Swae Lee showcases her unique blend of 2000s mainstream pop and modern R&B.  EARMILK caught up with Chelsea to talk about her songwriting process, her future projects and inspirations, and her unabashed love for Britney Spears.

“Honestly, I’ve always been socially awkward” Collins laughs as she describes her introduction to songwriting, “It started when I was around 10 years old and I had my first crush and wanted to find a way to communicate but I was so socially awkward that I couldn’t.  So I said, okay, I’m going to write a hit song and show this guy how I feel.  I was a huge Taylor Swift stan and I thought it was dope what she was doing.  I just thought this is an amazing outlet to communicate something without having to actually communicate.”  Collins has formed and developed her love of songwriting over the years and parlayed her talents into a publishing deal with S2 Publishing and a record deal with LA Reid's HITCO label.

If it wasn't readily apparent from last May's breakout single "07 Britney", one of Collins' biggest sources of inspiration is Britney Spears.  While most modern pop singers have Spears to thank for their careers and media attention, Collins' fascination with the pop culture icon goes deeper than just the music.  "Anytime I was having a bad day when I was growing up I would just go on YouTube and watch Britney Spears.  I don’t know if that’s weird or not” she laughs, “But she really just boosted my serotonin, whatever it was, and she's such a charismatic performer.  Despite everything she has gone through, she's stayed so sweet and so kind, which is really admirable.  She was the first person I ever stanned for sure.”  Her Britney fandom led her into an appreciation for Max Martin, a frequent Britney collaborator and arguably the most successful songwriter of the 2000s.  "Once I really studied the songwriting, I started becoming a huge Max Martin fan. It was super dope because when I first moved out here I signed a publishing deal with Savan Kotecha (S2 Publishing), who's one of Max Martin’s guys and so being brought into that world after studying it for so many years was really amazing.”

Collins was raised in a musical family, starting in musical theater at just 5 years old and soon after learning classical piano.  "I did piano until I was like 10 and that’s when I realized I could write pop songs.  I picked up guitar around then because I wanted to be like Taylor Swift” she laughs, “And then that eventually led to me moving to L.A. at like 16 to be like I'm doing this, I'm going full force, and it was around then I also picked up producing because sometimes if you don’t produce the songs yourself, it could take up to a year to get the bounces back.  So I just wanted to make music and got into producing myself.”  Chelsea's brother is Nico Collins, also an acclaimed singer and songwriter.  When asked about the experience of sharing her rise to popularity with her brother, Collins said, "It’s been dope to share the come up with him.  Every aspect of life, good or bad, me and Nico have been through it together.  And when people actually start to care about the work you’ve dedicated your life to, its super cool because you have someone you can share that with.  Also in this industry, it's so important to have someone you can completely trust.  I’m super grateful for him, he’s like my rock and without him I feel like I’d be all over the place.”

Collins' newest release (co-produced with Simon Says and Tank God) is a steamy R&B sizzler that also contains a dark undercurrent.  Exuding a cloudy yet vibrant energy, the track really shines with the savvy songwriting of its two stars.  As it steadily morphs from a boilerplate pop ballad into a sordid exploration of the depths of love and loss, the track stays accessible and catchy.  It's a unique trait to exist in 3 dimensions as a radio-ready pop song, a steamy love affair ballad, and a deeper dive into primal psychological fears of separation and anxiety.

The sultry and emotion-packed accompanying visual (co-directed by Collins with Christian Guiton) is a cautionary tale of love and obsession leading to heartbreak and self-harm.  Following Collins and Swae Lee with cuts between past and present, the video serves to remind viewers of the dark side of heartbreak and how its effects can be devastating.  Beginning with the narration, "“I know you never saw it coming, but somehow, you always knew something was wrong, and you were always there to make it right," the tone is set early on to be more than just your standard pop song.  The video flashes many steamy scenes interplayed with liquor binges and empty pill bottles.  The most impressive part of the video is that it doesn't glamorize these facets of relapse and depression and instead paints a real picture of the dangers of drugs and alcohol used to numb the pain.

Making use of what she calls her "organized chaos," Chelsea Collins is quickly becoming the sort of buzzing superstar that will be penning Billboard hits for years to come.  Collins is an extremely rare blend of commercial appeal and genuine, hard-working talent that wants to build real connections with her fans.  Gearing up for her debut EP coming this Summer, "Hotel Bed" is a good start for any new fans wanting to become familiar with Collins' music before she becomes a household name. 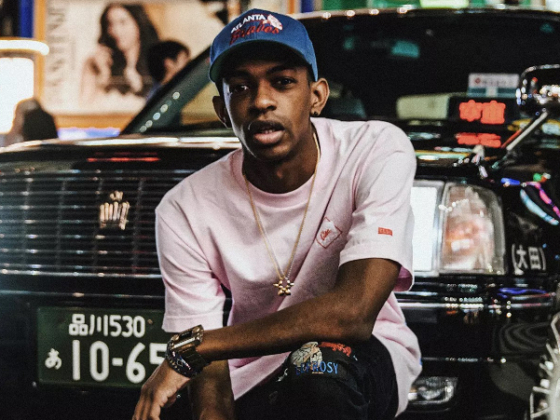 Ace Hashimoto continues the lead-up to his debut album with new single "O.M.W. (One Woman Man)"