The fast-rising Los Angeles hip-hop duo BlueBucksClan have just released their scorching new mixtape Clan Virus 2, setting the scene ablaze with bangers like "Lil League" and "Horace Grant". Taking the classic LA sound and elevating it to a new level, the group has quickly risen to a high profile as one of the strongest new acts coming out of the city. The duo is poised for a takeover in 2021, having received high-profile co-signs from big names like Quavo and Hit-Boy. Consisting of rappers DJ and Jeeezy, BlueBucksClan's sound primarily consists of bass-heavy, catchy beats and raw vocals with lyrics about their environment on the streets of LA. Recently, DJ and Jeeezy caught up with EARMILK to discuss their recent album Clan Virus 2, Los Angeles hip-hop, and upcoming projects.

Reflecting on their beginnings, BlueBucksClan's DJ says that they started out "just used to make music for close friends- if they thought it was tight, we'd just share it around with them". He continues by saying that eventually "they liked it so much, that they talked us into really taking it seriously". It was this inspiration from their inner circle that led to the start of a burgeoning music career. Moreover, it seems that BlueBucksClan's origin story was very organic, just beginning with a tight-knit group of supportive friends.

The momentum that BlueBucksClan has gained since is astounding. In a relatively short period of time, the group has gone from receiving thousands of views on their YouTube videos to hundreds of thousands. Jeeezy noted this growth, stating that "20, 000 views was a lot for us at the start, but then it just kept growing to 100, 000, 200, 000, and then I knew we really had something". People were really connecting with BlueBucksClan's sound and what they had to say, both inside their home city of Los Angeles and across the globe. Jeeezy remarked that "once we started gaining real fans, we knew we had to keep going", commenting on this newfound relationship that the duo had fostered with their budding fanbase, and the need to continue to provide high quality music that resonated with them.

A prime example of BlueBucksClan's powerful, catchy sound is "Lil League", their single with Quavo and Hit-Boy off their new mixtape Clan Virus 2. On this track, DJ, Jeeezy, and Quavo trade smooth verses over top of an energetic instrumental.  Discussing how the song came together, DJ says that "it was very organic, and it kind of came together by accident. We were at the studio with Hit-Boy, and Quavo ended up walking in- we didn't even know he was coming. We did it right there, we ended up doing the song in about 30 minutes". For such a spontaneous track, the song sounds incredibly focused, providing a refreshing twist on classic Los Angeles hip-hop. Furthermore, the duo followed the song up with an equally well-executed video. Overall, this visual does a great job of capturing the group's raw energy and effortless style.

"Lil League" is a single off their new mixtape Clan Virus 2, a collection of bass-heavy bangers that elevates the Los Angeles sound to a new level. The album has seen a positive reception since its release despite high expectations among fans. When asked how they feel about the reactions to the album, DJ answers that he feels they have "given everybody what they've been waiting for". This proves to be true, as Clan Virus 2 preserves the core of BlueBucksClan's sound while still pushing it forward.

As for the future of BlueBucksClan, the duo stated that they have some collaborative albums in the works. They are working with some high profile LA acts on new projects, with DJ saying that the new records will be "something that the city needs to hear, something that will make LA different in a big way". He hopes that "everyone will be able to relate" to the new music, with Jeeezy adding that they want people to know that "we really come from South Central LA, we come from the same streets and we really know what's going on out here". It is this seasoned perspective that makes BlueBucksClan a voice for their community and neighborhood, and keeps fans hanging on to every word.

Overall, it is apparent from talking to BlueBucksClan that they are a duo with much focus and ambition, who are poised for great success in the near future. Through combining catchy, fiery music with wisdom and knowledge, they present an appealing, relatable package. As made evident by their recent mixtape Clan Virus 2, the duo has forged a unique, powerful sound that is capturing the ears of listeners in LA and beyond. One can assume that a bright future in the music industry lies ahead for DJ and Jeeezy. 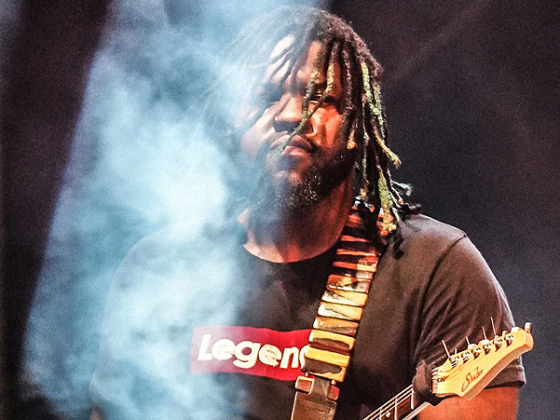 Hadiya George got the "Hot Flavor" for you [Video]