Rick Ross closes out Port of Miami 2 tour in NYC

1 year ago by Vicky Inoyo

What better a place to have the boss of hip-hop than New York? Earlier this week, Rick Ross just about shut the city down with his sold out show at Gramercy Theatre for the “Port of Miami 2 Tour.” New York has continuously welcomed rap music with open arms, so performing in NYC was monumental for the Florida rap legend.

Stepping out in all white, from his glamorous chains to fresh Air Force 1’s, Rick Ross did not come to play. Immediately upon entering the venue, each and every person was immersed in chest-thumping bass and the rapper’s iconic adlibs. As I looked into the crowd, I saw everyone from great-aunties to little cousins spitting each bar off the rapper’s new album. Ross also blessed us by performing multiple iconic throwbacks including “9 Piece” featuring T.I and “Tears of Joy” off his certified gold album Teflon Don. The way Rick Ross was able to weave through anthems while maintaining his “you wish you were me” attitude was highly infectious and transformed the whole crowd into the best audience I’ve seen in a while. 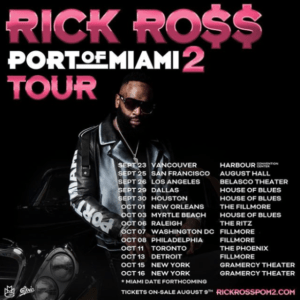 New York was the last stop of “The Port of Miami 2 Tour,” but Rick Ross will be giving a few more performances before he closes out the year. Click here to see if he’ll be in your city. I’m telling you, it's worth it.