2 years ago by Natalie Morin

Imagine an alligator — its sleek, scaly body, glistening in the sun as water calmly skims over its back. It waits patiently, tempting anyone who dares to take a dip. The water is so enticing, so warm, why not test it? And in a flash, the alligator catches its prey in a swift bite, its target unable to free itself from its clutches. South Korean group Monsta X heralded their 2019 return with this concept in mind — perhaps an intense image for those unfamiliar with dynamic group. But for those who know them best, like their dedicated Monbebe fandom, it’s a fitting metaphor for the fierce septet.

In February, Monsta X, composed of rappers Joohoney (formerly Jooheon) and I.M., and vocalists Wonho, Shownu, Minhyuk, Hyungwon, and Kihyun, made their comeback with Take.2 We Are Here, a high-energy follow-up to October’s Take.1 Are You There? Within the K-pop scene, Monsta X are known for their unfailing duality — sleek and sensual one minute, and then explosive the next. Their signature sound is characterized by high-octane dance tracks, mixed with EDM, hip-hop, and trap. In short, Monsta X are a hypnotic, welcome assault on the senses that have made them stand out since their 2015 debut.

And as Korean music has only continued its spread in the West, Monsta X have only continued to sink their teeth in deeper. In 2018, the band embarked on their second world tour, released a mini-documentary with Gallant, and were the first Korean act to perform at iHeartRadio’s annual Jingle Ball. This year, they’ve released Take 2., which features “Play It Cool,” a collaboration with notable DJ Steve Aoki, are gearing up for a third world tour and will be the first K-pop group to ever perform at the iHeartRadio Music Festival in Las Vegas this September.

This may seem like a whirlwind of pressure, but to the group’s maknae (youngest member) and rapper I.M., it’s why he believes that this will be a defining year for Monsta X. I.M., who is the only member who speaks fluent English, spoke with EARMILK about Take 2., the nuances in Monsta X’s performances, the definition of K-pop, and the group's exciting year ahead. 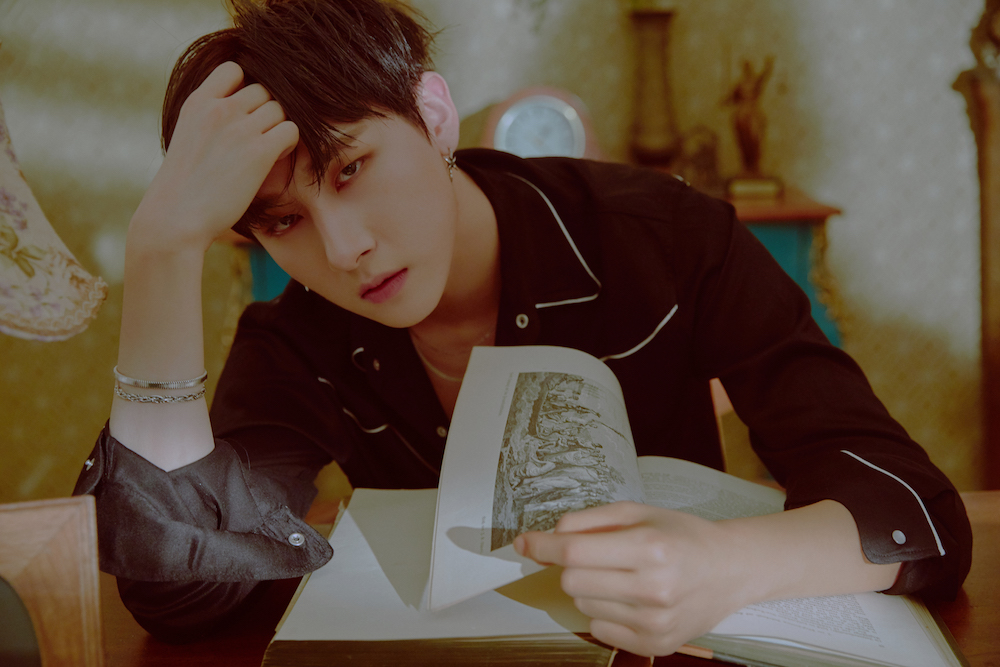 EARMILK: How would you describe the vibe between Take.1 and Take.2?

I.M.: “Here’s what it is in the simplest of terms. For Take.1, the whole album concept kind of intense and sexy, and Take.2 is kind of sticky-sexy, like alligators.”

“Like a swamp. (Laughs). That’s the visual concept, but of course then there’s the message that we’re trying to express. We are connected, we are one, and you are not alone. That's why the Take.1 album name is Are You There? — you’re looking for a savior, looking for comfort. And the answer is in Take.2: We are here. We can be those people for you.”

Why did Monsta X settle on the concept of the "alligator"?

“The alligator has lots special qualities that we like and relate to. Physically, he has a big body, like us. I'm not just talking about me, but Wonho or Shownu for example. (Laughs). And if he bites that he wants, he’ll never let it go, and it’s game over. And it’s unique. There are lots of [Korean] songs about animals like rabbits, or dogs and cats… But there have never been alligators before.”

How did your collaboration with Steve Aoki for “Play It Cool” come about?

“Steve Aoki contacted us saying he was interested in a collaboration, which was unbelievable because he’s a huge DJ and figure in the electronic music world. When I asked him if there was a special reason why he contacted us and picked us, he literally answered, 'because you guys are Monsta X and you guys are dope.' And, ironically, in my head I was trying to...play it cool.”

Would you say there’s a difference between onstage and offstage Monsta X? Who would you say is the most different?

“Every person has lots of personalities inside their inner world. Me, and even you have a certain duality. Maybe I’m the most different. And Jooheon, Wonho, and Shownu. ...And Minhyuk, and Hyungwon, and Kihyun. Well, all of them. That's all seven members. (Laughs).”

Do you guys ever talk about switching up your concepts? Like maybe doing something softer? Or do you want to stick to what you do best?

“Yes, sometimes. A lot of people think Monsta X is a very intense group — we have very strong sounds, and the dance moves are very harsh. But we also have the ability to be softer and do more mellow, even sad things. And, you can find moments of that in the album, but we’re definitely thinking of ways to maybe express that softer concept in the future."

Who in the group still manages to surprise you, even after having known each other for so long?

“I’d say our leader, Shownu. I always think of him as this pillar of strength, like a leader should be, but he has lots of softness to him. He’s also thoughtful and thinks about the other members a lot. And every single time when we drop a new song he fully understands that concept and expresses that energy 100% to the audience. It’s something I really respect."

This past year, Monsta X had a world tour, had all those wins with “Shootout,” had a collaboration with Gallant, won at MAMA, and you played Jingle Ball. How do you deal with all of the pressure to keep that momentum going?

“Well, the good thing is that I enjoy my job, which is entertaining people. Of course there's lots of pressure, but I expect it. I would never want to feel like I’m not taking my responsibilities seriously. The most difficult aspect is that there are so many factors out of my control, especially the audience’s reactions to what we do. There are lots of favorable opinions and some that are not, but we just try to ignore any negativity and keep striving towards our goals.”

You’ve been all around the world: what are the differences you’ve noticed between audiences in different countries?

“It's really hard to define, but at least in Japan, their reactions are very cute. Especially when we do aegyo — they really like that. They’re also very respectful, like when we start our performance they stand up, and they’re very polite while they enjoy. In South America, the Monbebe’s reactions are very intense. They throw their underwear on stage, they really feel the music. Actually, we learned from our previous world tours that we should change up the setlist in different countries to match their cultures and vibes."

For example, when we are in North America, we’ll choose songs to make the audience very hyped up, and when we are in Japan, we’ll organize our set so that it’s, I guess — smoother? Not sure what the right word is.”

How do you get yourself hyped up for your performances? Do you have a ritual?

“I honestly am always so excited to perform on stage. I don't really get very nervous anymore. I do have a sort of ritual though, which is that I spray myself with a sort of cologne. It's really hard to explain, but this kind of perfume makes my — how do I say this — heart thump. It helps me get in the right mindset to perform."

Monsta X put a lot of thought into styling and taking care of yourselves, which you don’t see a lot of male artists in the U.S. do, especially when it comes to hair and makeup. What would you say to people who feel insecure about being thoughtful about their aesthetic?

“In the end, I think that taking care of yourself is loving yourself. Every single person needs to learn how to love themselves. Everyone has their own charm — a really original charm point you cannot change, even through plastic surgery. And I think if you embrace that, and try to enhance that, it can’t be a bad thing. The point is that everybody needs to love themselves before they can start to love somebody else.”

K-pop is such a visual industry, that it’s no wonder there’s an emphasis on aesthetics.

“I think that's a difference between K-pop, and [other industries], and I think it’s a reason why it draws a lot of people. Especially now, this generation is not just interested in listening. They want something that’s satisfying to your ear and your eye. That's why we try to appeal to our audience with our outfits, makeup, and hair and try to have it all go with a song.”

Do you find that the word K-pop — which basically only means music that comes from Korea — is a little bit limiting?  Because your music is more than pop. You're mixing hip-hop, and EDM, and more. How would you define what you do?

“Our music has a lot of different messages and mixes genres. And I see it really as more of a feeling than anything. I basically define K-pop as a kind of music that satisfies all of your points in your body — satisfying to your ear, your eyes, that you want to sing or shout along to with your voice. And then there’s the social media interaction between fans and artists. I think all of that is the big difference between K-pop and everything else.

“And I think that's the reason why all the fans feel so much love in the music and the stages. This distance between you and me is so much closer when you’re feeling the music along with me while I’m performing, or when we send messages on social media. It’s a more friendly, connected relationship. I think that's why people love K-pop.”

What's next for the group?

“We’re beginning to prepare for our Japan tour, shows in Korea, iHeart Radio festival, and then the world tour this summer. When I was at Jingle Ball in 2018, when people asked me about our plans for 2019, I said 2019 is gonna be ruled by Monsta X, and I'm gonna make that a reality.”