2 years ago by Jason Heffler

With the Palm Springs pool party utopia known as Splash House on the horizon, we're here to dive into the lineup and give you the lowdown on some artists you simply cannot miss. 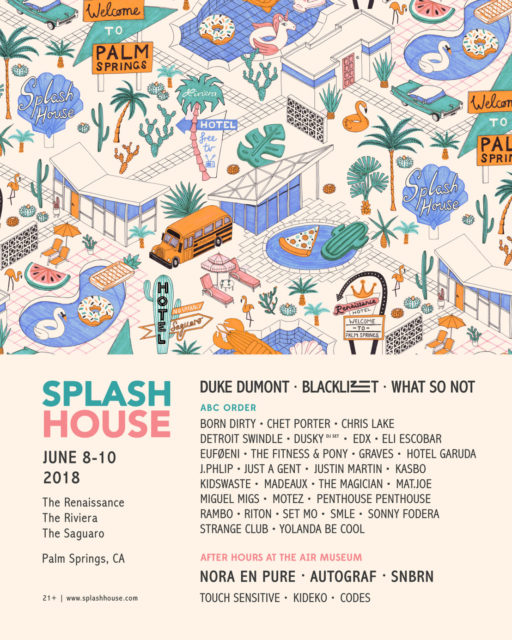 Just A Gent is your favorite producer's favorite producer. One of the most underrated beatmakers on the planet, his genre-shattering productions are brimming with originality and trailblazing sound design. He is one of the few electronic artists able to create gorgeous mainstream-worthy songs, like his fan-favorite "Limelight," while taking bold sonic risks. Wading through the vast, murky sea of Post Malone "Congratulations" remixes on the web, Just A Gent's sparkling future bass rework manages to rise above the rest.

"I'm not crying, you're crying" is what you'll hear from starry-eyed revelers watching Kasbo. The Swedish super-producer's March 2018 album Places We Don't Know is one of the most eloquent, beautifully-produced electronic records I've ever heard. It expertly blends pop and electronic music with the poignant mystique of ODESZA as opposed to the saccharine flavor of Cheat Codes.

What is a pool party without Yolanda Be Cool? The Australian duo is the exemplar of funky electro swing music ideal for sun-soaked summer afternoons. Brace yourself for the flailing open-palm-splashing chlorine riot that ensues when they drop "We No Speak Americano."

From their bubbly sound to their actual name, everything about future pop duo SMLE jibes swimmingly (are these pool puns working for you?) with the buoyant aura of Splash House. These guys make some of the most soulful, uplifting future bass you'll ever hear, and they were nominated for a Grammy this past year for their groovy remix of Bobby Rush's "Funk O' De Funk." However, Grammy-shmammy; lose yourself in their breathtaking track "Love Residue" below.

Hats off to Splash House's talent buyers for including Graves on this year's lineup. One of bass music's elite tastemakers, the Hawaiian phenom will bring a bevy of new fans to the festival, which is typically dominated by deep, tropical and progressive house. He is a downright mastermind behind the boards and one of the most sought-after collaborators in trap music. Oh, and he's got a production credit on Kanye West's My Beautiful Dark Twisted Fantasy.