3 years ago by Ryan Rosenthal

Dirtybird Campout, the adult summer camp festival hosted by the house legends at Dirtybird Records, has slowly inched its way into the grimier sides of genres by stretching out of their house music origins. With Claude Vonstroke debuting his Barclay Crenshaw project at the Campout last year, the festival has emerged with a much broader and elaborate lineup dripping with bone crushing bass. Shades, the space-time sound manipulating brainchild collaboration of Alix Perez and Eprom, will supply one way to burst your eardrums with electrifyingly ominous rumbles and shockingly pulsating beats this weekend at the Campout. EARMILK got a chance to chat with Shades to discuss the birth of their project, their inspirational origins within avant-garde culture and music, and where they plan to take the project next.

The Shades collaborative project began as part of a mutual respect for each other’s sound - the two artists met in 2014.

"We linked up in Los Angeles to work on some beats for Foreign Beggars, and as soon as we met we just found that our studio process was compatible on a level of personal interaction, even though at the time we were using different DAWs (Alix on Logic, Eprom on Ableton Live)."

So, during that fateful trip to LA, they came up with the foundation of what would eventually become the first Shades EP and the backbone of their gravedigging vision of sound.

Shades dive deep into the dark and gritty abyss of sounds within experimental bass music, with ranging inspirational input from diverse pieces of culture. Outside of music, they shared that their inspiration comes from "vintage horror and sci-fi, by directors such as Stanley Kubrick, Andrei Tarkovsky, and Ridley Scott, as well as visual artists like Gustave Doré and others who work in the tradition of, or iterate upon, neoclassicism." (Neoclassicism: Western movements in the decorative and visual arts, literature, theatre, music, and architecture that draw inspiration from the "classical" art and culture of Ancient Greece and Ancient Rome). 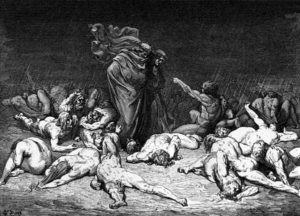 (Dante and Virgil among the gluttons by Gustave Doré, 1868)

In addition, they have been experimenting with adding "dark ambient interludes and soundscapes to their set," a sound they’re going to continue to develop on the next album. Their synth design is unparalleled, taking their set to an even eerier level of darkness comparable to the soundtrack of The Shining.

Within music, they both love 1990's rap, sharing a few of their favorites include, "East Coast sounds like Mobb Deep, Wu-tang Clan, Gravediggaz, DJ Premier, etc." In addition, they both love drum and bass, in particular, artists like Calibre, Digital, Dillinja, Spirit, and Goldie were major inspirations that influenced their sound with intense thriller-style demonic basslines and dynamically crafted drums.

The West Coast-based Eprom and the German-based Alix Perez have found their creative middle ground in their London and Portland studios. While they prefer to produce in the same room with a much faster and productive work flow, they’ll work on music anywhere they can, "producing a number of tunes on planes and in friends' studios in LA, Melbourne, Perth, and elsewhere." Shades is quickly gaining steam and spreading the virus of thunderous bass around the globe. With sights on the future, they intend to bring the project to a bigger stage and develop the live show as an audiovisual experience, with their next live show currently in the works. With a sound this powerful, we may be viewing the unfolding of a new Amon Tobin / Flying Lotus style live experience, with a touch of playful horror.

You can catch Shades demolish Dirtybird Campout on Sunday, October 8 at 1AM at the Bass Lodge Stage, if you dare.