It seems recently that Canada has put themselves on the map as a hub to many rising talents of mellow avant-garde electronic acts. This rise is evident with the spotlight on acts including Tennyson, Ryan Hemsworth, Teen Daze and On Planets; all artists merging feathery synths, subdued ambience and indie-pop vocals. Producer Thomas White has a fresh sound, heavy in plump synths and wavy beats. His unique articulations in puzzling together bizarre sounds result as fluid and inventive. RYAN Playground is best known for her debut EP elle, released off Ryan Hemsworth's not so Secret Songs label. The producer combines minimal structures of glittering synths with technological inspired sounds and tender vocals. Both hailing from Montreal, Thomas White and RYAN Playground team up to create an alluring monologue addressed to an inebriated lover in "Drunk Mind, Sober <3". The track is a release off Thomas White's EP Innerspace, due out in June. This is not the first time the two have collaborated, as they worked together in "Used to Be Cold" featured on elle.

Today EARMILK is excited to premiere the delectable track from the two Canadian names. "Drunk Mind, Sober <3" begins with a light drum pattern and slight chuckle which open up the track in a charming manner. Eventually RYAN Playground's sweet vocal work speak to drunken nights and slurred words. The garbled vocal blips over a warm plucky guitar shows a captivating approach at acoustic sounds meets electro-pop. The dwindling synths and clicky beats create a dainty appeal unique to both artists. 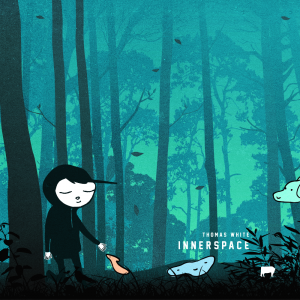