Okay, but have you heard of Soundset?

4 years ago by Ruth Jiang

So if you're a hip-hop lover and live anywhere in the Midwest or more specifically Minnesota, chances are you will have heard of this little music festival called Soundset. The lineup is always insanely dope, with artists like Vic Mensa, Chance the Rapper, and Logic having performed in years past. Makes sense, sort of-- Soundset is only one day long, so they really want to pack as much quality musical goodness into one day as possible.

This year, artists like Anderson .Paak, Raury, Goldlink, and NoName are making appearances along with well-established cool cats like A$AP Rocky, Future, and The Roots.

To get you Midwesterners hyped and excited about all the great performances that are going down this Sunday at Soundset, here are five awesome live performances of artists from the lineup, to further solidify your reasoning for going.

So Andy is gracing Minnesota with his presence before continuing on with his tour around the US and you're definitely not gonna want to miss out when he performs at Soundset. One of the most unique things about Anderson .Paak is his incorporation of a live band into all of his performances, which is pretty unusual for rap/hip-hop. Also he started out originally as a drummer, so it will be cool seeing him (probably) playing drums along with singing and rapping.

Moving ahead of the chill and smooth-vibin' Anderson .Paak, you'll definitely want to catch Danny Brown at Soundset. Any quick search of his live performances will tell you that catching this rapper live is experiencing the very definition of "hype-lit-dope-af" or something along those lines. Further confirmation of Danny Brown's genuinely eccentric personality can be seen on this Over/Under Pitchfork episode or his new documentary, if you were able to catch a screening.

Named to the XXL Freshman Class of 2015 and recently appearing on KAYTRANADA's new album (check out "TOGETHER"), gogo-inspired hip-hop artist Goldlink will be offering Soundset attendees a performance that sounds just like the recordings. If you're in the mood for some funky, down-low dance beats, Goldlink is your man.

Chicago-native Mick Jenkins is known for his strong lyricism and versatile music style (just listen to P's and Q's, you're gonna lose your shit once you realize how hard he goes with that alliteration), so when you listen to his tracks, it's really important to pay attention to the details. This Boiler Room set is good reassurance that Mick Jenkins does not disappoint live either.

Chicago-based NoName used to go by NoName Gypsy, but dropped the "Gypsy" part due to it being a derogatory slur to the Romani people . She's worked with Chance the Rapper on "Lost", off of his 2013 Acid Rap mixtape and her interest in poetry and spoken word has led her to create some really well done tracks, lyrically-speaking. She's worth checking out at Soundset, that's for sure.

You can still get Soundset tickets for $88 each but act fast as it's happening, rain or shine, this coming Sunday at the Minnesota State Fairgrounds. EARMILK will be covering the event so of course, be sure to check out our post-event coverage to relive the experience. 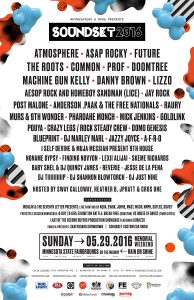